This is the story of Turai Ossa. This mission is entered through the storybook given by Durmand. Durmand is located in Lion's Arch, Kaineng Center, and Kamadan, Jewel of Istan.

1. Discovery - You found the strategic viewpoints Turai would have used to plan his assault on the undead lord.

2. Time Attack - You showed how swiftly Turai could have routed Palawa Joko's forces.

3. Slayer Bonus - You demonstrated the tactics Turai may have used to defeat Joko's elite bodyguards. 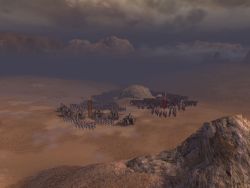 During this mission, you have the Turai Ossa disguise, 700 Health, 25 Energy, 2 Energy regeneration, 14 Swordsmanship, 11 Strength, 14 Tactics, and Sunspear rank 10.

Locations of the five strategic points[edit]

The five points are marked on the map in the infobox:

Durmand: "But should Turai fail, then all of Kourna would fall."

At the first ridge:

Elite Kournan Trooper: "Warmarshal, look below us! Our forces head into battle!"

At the second ridge:

Elite Kournan Trooper: "In the name of the gods... Warmarshal, the battle has been joined upon the fields below!"
Turai Ossa: "We haven't much time. We must find Palawa Joko before our forces are overwhelmed."

Arrival at the corsair encampment:

At the gorge near the center:

At the last overlook:

Elite Kournan Trooper: "Warmarshal, Palawa Joko has been spotted ahead!"
Turai Ossa: "You have done enough. I will deal with Palawa Joko myself."

Palawa Joko: "Pathetic mortal. The rabble you call an army is on the verge of collapse!"
Turai Ossa: "This from a coward who hides behind his army to avoid battle? Back up your words, Joko. Show me your supposed power!"
Palawa Joko: "If death is your wish, I shall gladly grant it."

"Turai Ossa cast Palawa Joko down."
"And with Joko's fall, his undead armies were routed."
"But though defeated, the undead lord could not be slain."
"So Turai Ossa entombed Joko where none would disturb him."
"Trapped in darkness, Palawa Joko cursed his prison and his captors."
"And most of all, he cursed his defeat at the hands of Turai Ossa, the Champion of Elona."

Bug.If you do this mission with a female character and play an emote with gender-specific text, it will ignore that you are playing as Turai Osssa and still use the female form "she/her" instead of "he/him".