Gruesome Ribcages are a skeletal trophy dropped by the Abominations in post-Searing Ascalon. 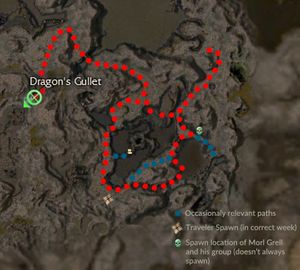 Enter Dragon's Gullet from Flame Temple Corridor and follow the route on the map, the direction you take when clearing the circle part doesn't matter as you'll have to circle back to rezone after the farm regardless of which way you walk it. This route mostly contains groups of between 2-4 Abomination though groups may occasionally spawn together and be hard to pull apart. One group of Hydra, a couple groups of Tar Behemoth and very occasionally a group of Charr are also along the route though these should not be too hard to take down. Bringing a bow to pull groups spawning inside the tar can help speed up the farm.

The exact spawn locations and numbers of Abomination fluctuate quite a bit, hence the blue paths on the map. There won't be any spawns outside of these routes though. Sometimes Morl Grell spawns on the marked location. After clearing the route, walk back to the portal to rezone. An average run yields about 6-7 ribcages.