[BaR] was founded near the launch of Guild Wars by Quintus Antonious. The first member of [BaR], apart from the founder, was co-founder and head officer Germanus Octavius. For many months, [BaR] remained a small guild with just two members until public recruitment was set up in late 2005. Slowly but surely, [BaR] became larger, and to this day, is still growing.

[BaR] is situated on the Imperial Isle Guild Hall, and has all services unlocked within the hall. The guild is Kurzick aligned and is a full member guild of the Guild Wars Online Alliance.

Blade and Rose is focused neither on PvE nor PvP, and the guild accepts and contains members who primarily do one or the other, or both. However, [BaR] is often on the front lines of Alliance Battles.

Blade and Rose had a membership explosion, and guildwars.incgamers.net (formerly GWonline.net) has been gracious enough to give them forum space. [BaR] also hosts its own Alliance website. In 2012, [BaR] continues to be an active guild, with many members working on their Halls of Monuments, having fun, and awaiting Guild Wars 2.

The guild has had several leaders in its existence. All were important to the guild's development with Quintus Antonious being the most prominent among them.

The Guild and the Community

Blade and Rose Guild has made some small contributions to the community in various ways. Some examples are:

[BaR] PvE and PvP recruitment both are currently open.

In [BaR], players must pass a probation period of two weeks, during which they must show that they can fit in with the guild's expectations, culture, and current members. After the probation is over, full members vote for whether or not the probationary member stays. This system helps to ensure a pleasant guild experience.

When the guild opens a recruitment period, there are generally two types of recruitment it holds: PvE and PvP recruitment. 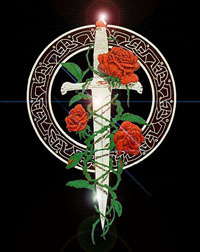 Or alternatively, you may contact the officers listed at right (in game) for more information.