Three hundred years ago, when the thriving Canthan port of Dinfang was invaded by the people then known only as "naitahlen" or "pirates," the Canthan Army sent a small force stationed at nearby Fort Fu to put down what they saw as nothing more than a pack of rabid dogs. When young Kitah arrived with her troops, she discovered that an organized invasion was underway, led by the naitahlen admiral, Appollonia. Severely outnumbered and out-gunned, the Mesmer created a cloud of illusion that made her squadron appear to double in size, then redouble, then redouble again until her force appeared a great army. As she ordered the charge, the naitahlen scattered in terror, many running into the sea and drowning themselves. In the midst of the chaos, Kitah found Appollonia, a Warrior, and the two fought until both fell down dead on the battlefield. Dinfang was ultimately saved, and Kitah inducted into Tahnnakai Temple.

Kitah is one of the ancient Canthan Heroes who is bound by Shiro until being freed from the Bound Kitah construct. After her rescue, the spirit offers her help by lending Vizu some of her strength. 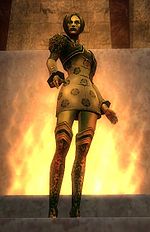 Kitah's statue in the temple

"I remember Dinfang, the fires... We believed the naitahlen to be but a nuisance with no leadership, no real ambitions...but when Appollonia amassed a fleet and declared herself an admiral, those pirates became something more. I fear this Shiro is just as ambitious, to imprison us in these...bodies."

"After seeing firsthand what Shiro is capable of, I fear I may have underestimated his abilities. During his first reign of terror, we remained safe here in Tahnnakai Temple. But his boldness...intruding on even the legendary heroes of Cantha...this has me very worried. I will aid you in whatever way I can as you follow his trail."

"If you have truly acquired the sacred Urn of Saint Viktor, the battle against Shiro has just received a mighty ally. I have heard that the urn draws its powers from destruction. Allow it to reach its full capability before summoning Saint Viktor."

"Perhaps you have what it takes to stop Shiro. I know little of the Spear of Archemorus, but I do know this: together, the spear and the urn should be a serious match for Shiro."

"When we fought the naitahlen, we were deceived by their seeming disorganization. Shiro may have thwarted the best chance you have had thus far, but I sense greatness in you. He may underestimate you, and in doing so, unknowingly give you a way to defeat him."

"The urn was but one object...now you have the power of the entire Kurzick army at your side! Go forth to the Unwaking Waters and gather the power within yourself to stop Shiro."

"The spear may be destroyed, but now you have the power of the Luxon army at hand. Travel to the Unwaking Waters and find the strength within yourself to stop Shiro."

"Even Kuunavang was susceptible to Shiro's will. Perhaps you possess something that Kuunavang did not. Learn from the Dragon, find Shiro, and then destroy him."

"The loss of Togo was a severe blow, but he died with honor protecting the emperor and all of Cantha. Now is your time to teach Shiro a lesson, and to prove to Togo that the faith he had in you was well-placed."