Funny how people depend on EotN skills like Pain Inverter, EVAS, Sniper Support plus consets to kill a Prophecies boss.

This is the team build I used on literally my second visit.

A lot can be improved: 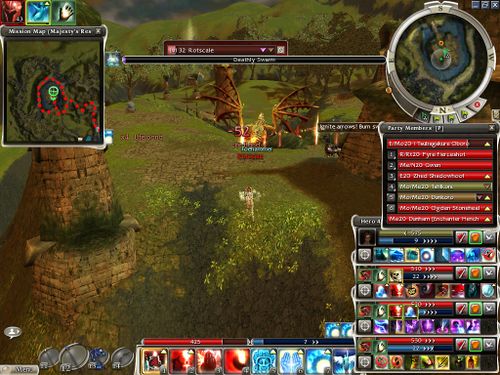 perhaps we should reword that since one user's guide isn't really comprehensive - bring rupts and prots is all I get from the above (and lol if you need 2x PB + a ranger rupter with three healers). (rotscale isn't even minorly troublesome for a modern pvx team with a set of prots) -Chieftain Alex 14:22, 30 October 2013 (UTC)

We probably don't need to link to anywhere really, since killing Rotscale isn't really a challenge anymore now that you can have 7 heroes in a party (which means you don't have to go through the hassle of getting a team of 7 players together). Even the above section proves you can bet him in HM with a party that consists of 6 heroes and 1 henchmen using only Core and Prophecies skills, so any balanced team build will most likely work. I think the links to here should be removed from Rotscale and Majesty's Rest, and just add a note to the note section of Rotscale mentioning which foes appear next to Rotscale, so readers can figure out what skills they will encounter when fighting Rotscale. --Silver Edge 05:52, 31 October 2013 (UTC)