Seeing as ANet has called this place other things in the past, should we redirect those here? On Image:PosterMapElona.jpg (official map) it says Venta Cemetary (misspelled), and on the official map I got with my collector's edition it's called Cemetary of Dunahm (again, misspelled). — Galil

If one of your equipped skills is Charm Animal you can replace this with Disarm Trap in the mission and still have the benefit of a pet. — FatFong 22:02, 7 April 2008 (UTC)

This happend me too... I ended op with a 5/4 party. The ehnchman who arent available at Kamadan where kicked from the party, but they who are available stays ^^ |Cyan Light

Not too different from the Blacktide Den mission, where you can end up with a party of 8 in the Sunspear Great Hall, good for vanquishing if nothing else. --BramStoker (talk, contribs) 15:32, 29 November 2008 (UTC)

However, the note is not completely right; you can only vanquish Plains of Jarin. Note rewritten. --

The Mission route suggested on the map, in red, is good until the 3rd (last) tower encountered. However, immediately after that you encounter two separate locations where several kournan patrols pass. Without pulling, a party cannot fight any one mob encountered in these areas. The other patrols will wander into aggro.

As an alternate route, after taking care of the last tower, I would suggest taking a northern path around the last two rocks. While you will still encounter kournan soldiers, these are at fixed locations (they're not patrols) so you can deal with one group at a time.

Strangely, I noticed that the Walkthrough suggests players "go directly to the north-west corner of the map following the north wall" which pretty much agrees with the above. However the map shows a different path. A picture is always preferable to text so most folks are probably following the map and having more difficulty than necessary. -- Sabardeyn 19:38, 23 July 2008 (UTC)

I have the same problem with the Yellow Path. Looking at and followed the mission map for this to get the Master "Award" for this mission. Found out that the path shown between Guard Posts 6 & 7 (on the yellow path) takes you too close to the garrison and triggers the siege attack. Currently looking at a different path to stay out of the garrison's range. RandwulfX 22:12, 16 August 2009 (UTC)

You wandered too close to the center fort. If You are too close they launch a siege against every party member. --Monolito 10:40, 23 September 2008 (UTC)

I want to say this happened to me for no reason today, too. I could have sworn a warning message shows up when/if you get too close to the center thing on the map.
I received no such message... so maybe it was the sunspear recruits that got spotted..... but either way.... all of a sudden I got hit by 22 siege attacks almost all instantaneously. kinda frustrating.
here is where I was on the map 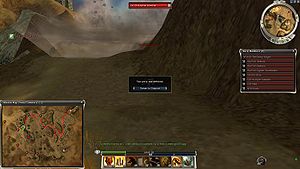 Sounds to me like you may have the Mission warnings turned off under F11 graphics options. (you were way too close though, you have to go NW then circle around to kill those archers.)

Also, as long as we're talking about the Disarm skill, you can switch it on your skill bar after you accept it. I pressed the button to bring up my skill bar accidently and then dragged the Disarm skill from slot 8 to 7 by mistake. I switched it back to where I wanted it in the first place and thought that was strange. Is that normal? Is it because I accepted the skill in the mission? I wonder if the same is true of Celestial skills or Norn skills (i.e. Ursan, Volfen & Raven). Sardaukar 04:59, 9 May 2009 (UTC)

Just tested Disarm (again), Celestial and Volfen (so I assume the same is true with Ursan and Raven). All can be moved around on skill bar after you've accepted them. Good to know I guess, so you don't panic if you accidently put it somewhere on the skill bar you didn't mean to. Sardaukar 05:25, 9 May 2009 (UTC)

By far the most inappropriately worded dialog in this whole game. If they planned to force the skill on the player, then the character should state, "You cannot leave here without learning this silly skill." or something to that affect. Making it sound like an option has new players for this mission confused to this very day. I just assisted someone new from GW2 running it for the first time. Would it really be so hard for them to fix this dialog? I know they have said time and time again they plan to make no changes. But this is one string of text in the game and it would cause less confusion. --Wendy Black 09:07, 2 June 2014 (UTC)

Does anyone feel like writing an algorythm to find the fastest path between the Guard Posts? =D LunarEffect

Lawl.. all right - i should have some program lying around that extracts the position data. I hope you're happy with a simple MOB solution or so. What about height? ^^ --

I think height is negligible, because it seems in GW you move the same speed horizontally regardless of your vertical speed. It might be good to add the obstacles to the distances though. The MOB sounds good, but I suppose you could just as well draw an x and y axis on the map and take a ruler to measure the position and hardcode the position data for this special solution. hehe
But to the program:
We need a class to store the x and y coordinates of a Guard Post as well as the start and finishing point, which have to be visited first, and last and a list of these points...at least thats the approach that was taught us at university. There should be (n-1)! different possible routes to take...so if we have 12 Guard Posts (not considering the start and end point)...thats 39916800 possible routes. LunarEffect

Some kind of new bug?[edit]

I'm currently doing this mission, and I went too close to the garrison. I got nuked, but afterward, I went back to resurrect my allies...and the spot where Gehraz died was getting nuked with siege attacks, even though I got out of range. It was getting hit with about 5 shots per second. Anyone know what that's about? --75.86.196.198 01:57, 24 June 2009 (UTC)

This quest gives no directions to the one that follows it, gotta use wiki or run around aimlessly. LastDay 02:09, 1 April 2010 (UTC)

Or you could use your map. All the points are marked on the mission map. You can clear them in any order. ~Shard

This is sort of similar to how people are expected to know they have to find 3 mission outposts in the Crystal Desert and complete those missions before they could complete Augury Rock, even though the Augury Rock outpost is the first Crystal Desert mission outpost they arrive at via the Sands Of Souls quest. --Silver Edge 02:41, 1 April 2010 (UTC)

The reccomended skills section mentions an aforementioned spiritual pain method, however there is no previous mention of it. Is this a remnant from a previous edit?Dakota 21:32, 6 June 2010 (UTC)

I just finished the quest with bonus in HM, and during the last cut scene with bayel, one of the Kournans decided the Captain should die, and sat there attacking it with a bow. I couldn't get a shot of the kournan actually attacking, but I got a shot of the captain getting hit.

Often happens with cutscenes since they are drawn in real-time, and other creatures in the area can still interact with them | 72

Oh. Possible explanation: they get turned to allies for the duration of the cutscene? I believe that's how they do a lot of cutscenes, to prevent similar fighting, so maybe they weren't careful to get all of them or something. | 72

I don't think this is a bug[edit]

"Players have reported losing progress towards the Survivor title after dying due to a siege attack (from the fort), even though this type of death is not supposed to count." Maybe they got damaged by siege and then killed by an enemy. Can someone test it? Branimir 19:35, 9 March 2012 (UTC)

I removed this bug on the note section:"

Bug.On rare occasions, after a guard post is cleared, its symbol (on the mission map) fails to change color. Some players have reported that this sometimes leads to it not counting towards the bonus. If one of the guard towers does not change to grey the rest after it will not either.

The red will not wear off if players weren't fast enough to prevent the siege and turned it off after the Garrison's attack. Which means its not a bug. At least in Normal Mode, this does not affect receiving the bonus reward.

I've had this bug even with perfect mission completion (12/12), I'm going to revert you.

Thanks, Alex uploaded a screenshot as well. I think the procedure explanation to make it possible needs improvement.

After having done this quest so many times with so many characters, I just now noticed how paltry the max Sunspear point award is for a mission that easily takes a half-hour under typical circumstances: a measly 45 in NM (180 in HM isn't so much better given the time required). Most of the simple side quests leading up to this point give 100, and take no more than 5-10 minutes to do. Seems to me a mission's reward should be significantly better than a potentially ignorable side jaunt, especially for the Sunspear reward, seeing as how feeding a lizard, for example, is hardly as important to the Sunspear storyline as clearing out a dozen strategic guard posts. Meh. Kruhljak (talk) 15:30, 2 May 2012 (UTC)