From Guild Wars Wiki
Jump to navigationJump to search
Warning: Key elements of this quest-related article are incomplete. You can help the Guild Wars Wiki by expanding it according to the formatting guide.

This quest essentially involves travelling to two different areas and defeat five groups of enemies in each area. Just follow the quest marker in each area to find them all.

The quest groups in both areas are hostile to the other enemies in the area. You may use this to your advantage, although the Am Fah groups are situated far apart enough that you may be able to avoid most, if not all, other enemy groups.

Lei Jeng
"Despite their constant warring, the Luxons and the Kurzicks have always had a fairly stable relationship with the Empire of the Dragon. Since they are vassal states, the emperor is obligated to listen to their requests and act accordingly, though he remains, as always, a neutral party in their war. I know of your work to bring them together in order to defeat the Betrayer, but it seems like lately things have been unravelling. The invasion and attacks by the Am Fah and Jade Brotherhood have put them on edge, and they've both sent emissaries to speak with the emperor. I'm a little worried about them starting a fight in the city, so would you mind going to talk to them to make sure nothing is going on? I believe I saw them head off to Raisu Pavilion"

Accept: "Nothing is as exciting as political discourse!"

Ask: "Talk to the diplomats in Raisu Pavilion and make sure they aren't causing any trouble."

When first meeting with the Emissaries[edit]

Kurzick Emissary
"Aren't you the one that broke Saint Victor's Urn? Are you here to break the emperor's sacred artifacts now?"
⇒"Why have you come here?"

"Don't act like you aren't aware of it. I know you were there when the Ministry and those other hooligans attacked our citizens. I'm here to get the emperor to clean up his mess, and to protest the taxes that have been levied against the Kurzick people in order to fund their little war. We have enough trouble dealing with those barbaric Luxons to waste time dealing with the problems of the Ministry and its gangs."
⇒"That's pretty rude; I was the one who protected the diplomats"

"Be that as it may, those reprobates are still lurking around in our forest. Untill they are removed, I'm not leaving."
⇒"Can't you just remove them yourselves?"

"The Luxons are a larger threat than ever right now, so we can't afford the troops. Besides, I think the emperor should clean up his own mistakes. Unless you're offering to do it yourself?"

Luxon Emissary
"What do you want outsider? You may have won the convocation, but I won't forgive you for breaking the spear of our hero."
⇒"Why have you come here?"

"Hmf, as if you didn't know. We had some of our diplomats attacked by some of the gangs around here as well as some members of the emperor's own Ministry! I'm here to protest this kind of treatment as well as the increase in taxes. First they attack us, then they ask us for more money for weapons? Absurd! As if the dealings with those dirty Kurzicks weren't bad enough."
⇒"That's pretty rude; I was the one who protected the diplomats"

"You certainly did, but what about afterwards? Those gang members are still wandering the Jade Sea interrupting our business. I'm staying here until the emperor listens to me and gets someone to remove them."
⇒"Can't you just remove them yourselves?"

"The bulk of our forces are engaging the Kurzicks right now, and we don't have men to spare. Anyway, this is the fault of the emperor and the Ministry to begin with, so they should be the ones taking responsibility. If you're so worried, why don't you go remove them?"

After clearing the Am Fah and Jade Brotherhood[edit]

Kurzick Emissasry
"Aren't you the one that broke Saint Victor's Urn? Are you here to break the emperor's sacred artifacts now?"
⇒"I've removed the gangs from your land."

"You did? Well I...uh...that is, it's just surprising. I suppose I can leave then. I've already filed my complaint about the taxes."

Luxon Emissary
"What do you want outsider? You may have won the convocation, but I won't forgive you for breaking the spear of our hero."
⇒"I've removed the gangs from your land."

"Are you trying to show off or something? Well, no matter, I've finished filing my complaint about the taxes, so I've got nothing else to do here."

Lei Jeng
"They made you do what?! That's absolutely ridiculous! No, more than that I can't believe they don't even think of this as their problem too! The Luxons and Kurzicks are vassal states! They should be serving the empire, not the other way around! Those taxes aren't just for the Ministry of Purity either; a lot of it goes to help the citizens, too. Emperor Kisu is quite benevolent and may let this slide, but had they tried this with any of our previous emperors, I'm sure there would have been some serious repercussions. I'm very sorry to have put you through this after all you've done to help us and them in the past. Please take this as compensation for your trouble."

Bug.Sometimes the quest marker does not update after you killed 4 groups at the Jade Sea. This might be the case, that the groups got killed by other foes already. To update the quest you just have to head to Scourgewind, Elder Guardian via the path from the water. 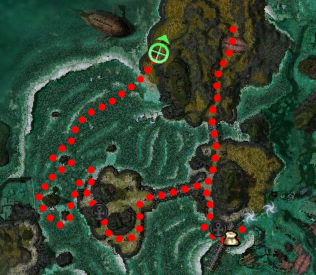