This relatively small but well-protected jade mine is deep within Luxon territory and is dominated by a structure built from a mammoth tortoise shell. Some of the most valuable and exquisitely preserved examples of jade fossils have been discovered here, and many can be found within Master Togo's personal collection at the Shing Jea library.

Complete the Gyala Hatchery mission and you will end up here. Alternatively, if you have befriended the Luxons, you may run here via talking to Hylas in Unwaking Waters (explorable area) and then passing through the Silent Surf. 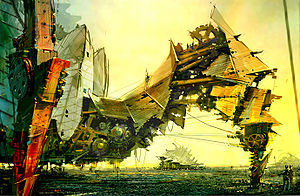