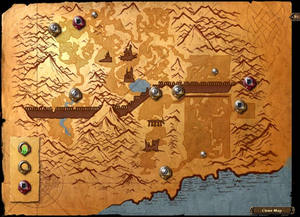 Map of Ascalon during the beta event.

E3 for Everyone 2004 was the first public beta for Guild Wars Prophecies. ArenaNet returned to E3 for Everyone in 2005 for a second beta and a championship.

During the week of May 10, 2004, ArenaNet invited the world to join our Guild Wars "E3 for Everyone" Event. Held in conjunction with the Electronic Entertainment Expo (E3), the event received a massive response. Gamers worldwide created more than 200,000 accounts to play the demo during its five-day run. The unprecedented experience allowed folks at home to play the Guild Wars demo with and against people on the E3 show floor. More than a dozen on-floor demo computers tied directly into the game server as the E3 gaming experience was shared with gamers around the world.

Literally thousands witnessed the game being played on a global scale while they were themselves at the E3 show. And in addition to the larger numbers and the sheer novelty of the event, the gaming public was delighted and surprised to see ArenaNet launch the event two days early!

The event demonstrated two significant technologies for Guild Wars. The first was the stability of our servers, which supported tens of thousands of concurrent gamers without a hitch. The second was the appeal and usefulness of ArenaNet's streaming technology. On the final day of the show ArenaNet introduced a dramatic new in-game event -- a new mission for a larger group with a brand new objective -- and this event served as an example of how we will provide frequent content updates without patching. With the positive experience of this large-scale alpha demo, and with knowledge that Guild Wars will not charge a monthly fee, fanmail has been filled with words of support and with confirmation of the eager anticipation with which fans are awaiting the release of Guild Wars.

E3 2005 presented the opportunity for some intense guild-versus-guild action right on the main show floor. The opportunity to sign up for the Own the Devs or Aim for the Stars competitions was first revealed on May 11th. On this date, the Top 100 guilds on the Guild Wars Ladder were given the opportunity to take on members of the Guild Wars Development Team or War Machine, the best guild in Korea and recent winners of a nationwide competition. The invitation was irresistible for dozens of the top guilds, and from around the globe, they stepped up accept the challenge.

The gameplay stations for the Dev and War Machine Teams were placed in a prominent spot on the E3 floor, drawing a large number of show attendees into the NCsoft booth to watch the match. Eight player stations were positioned below a massive video screen. The play-by-play and color commentators stood on a stage immediately in front of the video screen and worked with one another to describe the action. Split-screen camera work kept the rapt audience right in the midst of the action, changing the view from one player's screen to another, and sometimes simultaneously displaying four game screens and the intense faces of four of the competitors.

The War Machine team consisted of 7 players on the show floor and one team member playing online from Korea. Their performance was impressive, confirming their reputation as true masters of the game. The Dev Team rotated players throughout the show, and often chose some of the template characters as part of their team's makeup.

In some matches, victory was swift. In others, the constraints of the show's 20-minute scheduling meant that the match was not fully played out and no victory was achieved. For this reason, all matches were unrated challenges and did not affect the Guild Wars Ladder position of any participating teams. In cases where the time ran out on the meet, the challenger's ability to "go the distance" against either the Dev or War Machine teams showed them as winners, and each member of the team will be awarded a special prize.

— E3 for Everyone Event