Brash and impulsive in his youth, Naku was a known criminal in his home village in eastern Cantha. When the Tengu Wars began, Naku joined the Canthan army in an effort to protect his family and his shady business interests. Years of war gave him a new perspective on the nature of life and death, and eventually, Naku became a respected general, using his now considerable Necromancer powers against the Tengu who resisted Canthan rule. When Kahnmaatu, the village of his birth, was destroyed, Naku returned home and raised a vast army of minions from the corpses of his relatives and childhood playmates, then sacrificed his life to drive them directly into the enemy. This action shattered enemy lines and pushed the Tengu back far enough that the Canthan army was able to overcome them.

Naku is one of several Canthan Heroes whose spirit dwells in the Tahnnakai Temple, giving advice to those who seek it.

Falling under Shiro's control through the Bound Naku construct, Naku is released thanks to Master Togo and Mhenlo, and aids the heroes in their counter attack against the Betrayer. 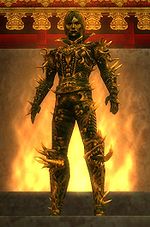 Naku's statue in the temple

"It was with grief and pride that I raised my village, family, friends, into an army of minions and drove them to attack the enemy who had taken their lives. But now...to be raised by these foul creatures and imprisoned in a flesh construction...it cannot be borne!"

"Curse that Shiro! After what he has done to me and to all of the people of Cantha, I wish that I could join you and kill him myself. During the Tengu Wars, the people of my village were ruthlessly slaughtered...I will not see that happen to the people of this city! I cannot do much to help, as I am unable to leave this temple, but perhaps I can give you some useful advice.
If you are traveling to Echovald Forest, beware! Not all is what it seems, and at times, the forest itself can come alive."

"The Kurzicks are a proud people. Do not treat their friendship lightly and do not underestimate the power of their sacred artifact; it may provide you the ability to strike down Shiro."

"Carry the Spear of Archimorus with you. When you unleash his spirit, it will strike against your enemies with a vengeful fury."

"The spear and urn are lost? That is a grave development, indeed. You must go to the Luxons and the Kurzicks and convince them to join this fight. Without their aid, I fear we will lose this battle."

"If the Kurzicks are truly on our side, perhaps there is hope. Travel now to the Unwaking Waters, but beware, the area is guarded by a powerful creature. The mighty Kuunavang may strike you down, but you must not give up... you must persevere."

"If the Luxons have joined this fight, we might yet win the battle. Together with the Kurzicks and Luxons, perhaps you will be able to withstand the dangers of Kuunavang long enough to break Shiro's grasp."

"Much power lies in the heart of a Dragon. Summon the powers of celestial darkness to overcome the evil you must face."

"Togo was a good man, and he served his duty to our nation and his fellow Canthans. His death must be avenged! Shiro must not be allowed to triumph!"

"Togo would be proud of you, as we all are. The people of Cantha owe you a great debt."