Silver Vaettir is a hidden Vaettir boss that appears in Drakkar Lake under very specific circumstances.

Leave from Sifhalla to Drakkar Lake then check for Kilroy Stonekin's presence at its spawn point on the promontory by pressing Alt. Kilroy himself does not need to be present for the vaettir to spawn, but him being there means there will be one less group of Modniirs in the way.

The road visible on the map leading to the promontory from the south always features a patrol of Modniirs (with Trample and Crippling Shot) as well as a group of popup Vaettirs (with Signet of judgement), which can make it difficult to travel. However there is actually a road coming from the north through the cave which usually features one lone mesmer Jotun that can be simply ignored and ran by (thanks to the cupcake's speed boost), making it an easier path.

Once at the spot, simply use Light of Deldrimor near the area where Kilroy Stonekin spawns for the Silver Vaettir to spawn. It will popup in the depression directly West of Kilroy Stonekin's location, a little under halfway to the cave entrance. Initially non-hostile, it will turn hostile after a few seconds. 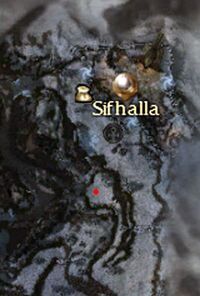