I quite like that October's flux is Halloween-themed. The Costume Brawl is going to be a blast. :) --Wormwood 01:02, 1 October 2011 (UTC)
What? Who could possibly assume that a flux which promotes quad necro hexways and lichspikes would be bad for the game? That's just ridiculous!--Four Year Strong 03:12, 1 October 2011 (UTC)

This is going to be retardedly chaotic, I love it. Will be interesting to see how HA/GvG work out.--Gerroh

Bahaha. I just spent 10 minutes searching gwpvx looking for this new meta pvp minion master build. couldn't figure out why every team had minions everywhere. DOH! it's just the flux. it is quite chaotic and fun. but annoying when you want just a normal match. --Moto Saxon 03:47, 1 October 2011 (UTC)

The Verata skills to steal minions is indeed as effective as it is fun. Let the enemy animate an army of minions for you steal. It's a fun Flux effect wich can be easily countered, but it's even more fun when you know how to make good use of it. Da Mystic Reaper 13:15, 1 October 2011 (UTC)

Haven't played pvp yet under this effect. Do the corpses get exploited upon death or can they still be used to make yet another minion? it should be listed on the effect's page whether it exploits the corpses or not. Nokota 13:49, 1 October 2011 (UTC)

I like it because it is Halloween themed and doesn't make necros,rangers, and mesmers irrelevant while making Dervishes and Elementalists powerhouses(Massive Damage).--Life Infusion «T» 00:19, 5 October 2011 (UTC)

I'm only bitching because i am on the receiving end this month, do ignore me DemonicFahrir

Last month was pretty bad too, like getting hit for 435 from Siege attack. At least Gunther won't deal with any minions (Gunther's Gaze). Previously Unsigned 22:05, 4 October 2011 (UTC)

It is the best tactic because it's hilarious!--Gerroh

The flux effect in spanish appears with the text of Quickening Terrain. Is there anywhere to report it? Linu 19:42, 1 October 2011 (UTC)

There is, actually. ANet has a Guild Wars support forum where you can report bugs: https://forum.guildwars.com/forum/ [ Tyloric ]

I'm pleased in one way[edit]

I go into the training arenas with a 7Hero team, just to earn Balth points for skill unlocks and zkeys. It's cruel, I know, but there you are. Anyway, I found that this Flux, as implied by the descriptions, does not trigger on hero or henchie deaths, so for my use of PvP-like modes, it is basically a non-event. Cynique 08:24, 3 October 2011 (UTC)

7Hero teams in PvP? What? How'd you do that? Waar Kijk Je Naar™

The Training Arena allows you to go in with heroes, and you can do it with a full 7Hero team. Sure, it's not real PvP, as the opposing team is just Zaishen henchies, and in fact, even if you have seven heroes, the enemy team is only four, poor guys. Makes for an easy way to earn 2,000 Balth points each day. Cynique 10:02, 3 October 2011 (UTC)

If this is the case then I guess that 'training area' does not count as a real pvp instance. I trap for 6k balthy pts daily in zaishen elite with 3 henchies (me being the lone trapper, and I know how to make it work). On the rare occasions they do die (mostly due to degen team) FLUX did trigger. Enemy npc deaths don't since they are 'PVE' creatures (using PVE version skills). -Wrei110.175.241.56 11:46, 3 October 2011 (UTC)

Incorrect, the flux is meant to only take effect on players and not NPC's. InfestedHydralisk 17:51, 3 October 2011 (UTC)

Then I suggest you actually DO zaishen elite with henchies to VERIFY it before you say the WRONG thing ( and make an as.s of youself) InfestedHyralisk. Let me rephrase a previous quote: "On the rare occasion MY ALLIED HENCHIE NPCS did die, FLUX did trigger". I'm not tech savvy enough to post a screenie but you can easily try it yourself. -Wrei110.175.241.56 09:40, 5 October 2011 (UTC)

(Reset indent) FFS people, how hard is it to post a screenie? Make the screenie in-game, note the filename, click "Upload file" in the toolbox, navigate to the screenie using the "browse" button, select it, click OK, select "User" and "screenshot" below, click submit. Then copy/paste the name from the page that appears inside double-square brackets in the page you want to post it. [[File:Blah_Whatever.jpg]] Cynique 09:57, 5 October 2011 (UTC)

Someone got dhumm'd minions killing players in JQ outpost kurzick side 21:25, 4 October 2011 (UTC)

This is not a bug. Just like previous flux affects like the one where if you move faster than normal, you lose health. So players could kill themselves in the outpost because it has PvP effects with the aide of speed-boost items(sweets). 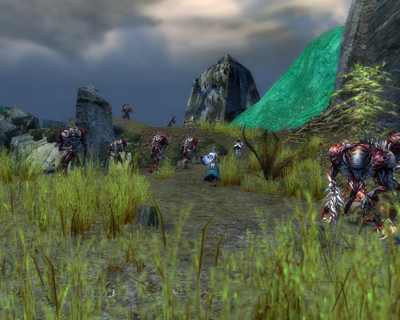 Oddly enough, when I switched weapons while a minion was attacking me, my health bar showed that my health returned to full, however when I typed /health my actual health was different from what the bar said.152.7.17.203 23:19, 4 October 2011 (UTC)

Wait.. so how did this happen? How did somebody die in an outpost to leave a minion? And don't minions die off pretty quick? --Musha

I need to correct my statement, this actually was a BUG. The devs let the earlier flux effects slide when they occurred in outposts. source --> https://forum.guildwars.com/forum/forums/gamebugs/Minion-Flux-in-Towns/page/1 --(Desmond Dreadheart 22:43, 5 October 2011 (UTC))

Erm, surely you mean it the other way around? I sure don't know what Gaile and Zack are talking about there, though, but a bug is an error that is unintentional. Flux effect on an outpost was known, but it was not a problem before Minion Apocalypse. Perhaps Flux was "bugged" in the first place, but they didn't seem to think it'd do any bad. Which, of course, it still didn't. 91.155.145.159 07:32, 7 October 2011 (UTC)

"...technically the Quickening Terrain flux was bugged when it was allowing people to kill themselves in an outpost. However, it wasn’t something we thought needed fixing, since it didn’t count on players’ /deaths and it was something a player chose to do to themselves (not to mention is was just plain funny). The main difference between that bug and the Minion Apocalypse one is that the minion bug was out of any individual player’s control. If a player didn’t want to participate in the bug they were oftentimes out of luck because it could be perpetuated by everyone else in the district." -Zack Nickerson
The above quote suggests all the flux occurrences in outposts were bugs. --(Desmond Dreadheart 19:35, 7 October 2011 (UTC))

Zack also said (after QT) that ANet was aware of the possibility of suicide-by-sugar before they released QT. In other words, ANet might not have intended to code it, but they did intend to release QT with the bug. By this wiki's definition of bugs, that makes the QT bonus effect a non-bug. Zack is not required by law to be careful about his word choice--he probably used "bug" because it was easier than writing, "technically the Quickening Terrain flux had an extra effect that we didn't intend" and "the main difference between that extra effect that we didn't intend and the Minion Apocalypse bug is that..." 76.199.138.171 20:46, 7 October 2011 (UTC)
See Talk:Quickening Terrain#Deaths in outpost due to Sugar Rush/Jolt: not a bug76.199.138.171 20:54, 7 October 2011 (UTC)

Heh I honestly didn't even think about that, the minion apocalypse pretty much didn't have any gameplay effect whatsoever.. Maybe if it had happened in all areas it could be comparable, but like this it was just a minor flux side effect for lolz, nothing serious. Actually they were thinking of keeping it in game due to the extremely low impact on anything and good laughs. So, I would say that the relation is very loose at best, not sure if the trivia is worth keeping at all.

- that was preventing a bug where necro griefers in the kurz side using aura of the leech, arcane Echo, were making a lot of minios, and then they suicide themselves. Thus the masterless minions were killing gatekeepers and Gunther. --67.197.74.197 18:43, 27 October 2011 (UTC)

That was the original intent of the skill, although in an ironic bit, it's now possible to kill him just as easily using this flux, by using Blood is Power to kill yourself repeatedly during the 60 seconds you have before a match starts, take over the minions with Verata's Aura, load them up with death nova, kill yourself next to gunther, and then watch as he kills them all and takes 1100 damage from the explosion. There have been cases where players have synced into the match and killed him before the game even began. When this flux was introduced I thought it was going to be pretty harmless, but even in arenas where the entire premise of the game isn't flawed, it's causing problems as a result of too many objects causing high latency. I wish they'd just get rid of the damn things for a while, or if not, do a good job of trolling people, like putting Abaddon into each PvP match, or replacing the guild lord with a Hopping Vampire. –Jette 20:02, 27 October 2011 (UTC)

Ok, I can see that we pretty much know this flux always occurs in October and during those quests, but should it be marked as historical when those are not active anyway? Currently this not being marked as historical causes it to appear in the table on Flux, which strikes me as odd when its beside the current one. -Chieftain Alex 11:41, 13 April 2013 (UTC)

(your memory is amazing) I guess my next step would be to raise the question of what we want the table / if we want the table on the flux page itself. Talk:Flux#Tables redundance -Chieftain Alex 23:25, 13 April 2013 (UTC)
edit: just changed the effects infobox so that flux effects are now categorized. this will populate that table again >_> -Chieftain Alex 23:30, 13 April 2013 (UTC)