Philip Of Ashdown - Ranger/Mesmer - Prophecies, ready to head off to Ruins of Surmia - Strider pet 'Emu' 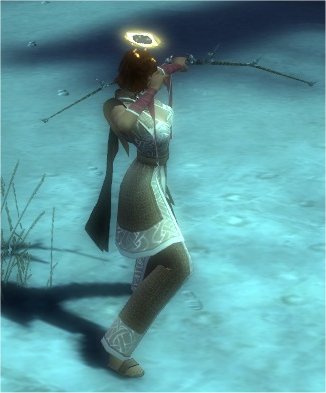 La Madeleinoise - Warrior/Mesmer - Prophecies - made it to Lion's Arch, then went to Boreal Station and the Eye of the North, then to Kaineng Center to buy some max armour (Canthan) that's more exciting than the rather blah Tyrian stuff that's available in Boreal - now back in Kryta to wander around until she Ascends and gets her attribute point quests done, then back North to get through to the CTC for Silver Eagle armour! - current step is travelling to The Wilds.

Deux Rubans Bleus - Elementalist/Mesmer - Prophecies - the first of my Prophecies characters to reach Lion's Arch, Kamadan, Kaineng, and Boreal Station - utterly crushed Consulate Docks - now has a full set of Elite Sunspear armour, although there isn't really enough of it to be "full"

Juste Deux Rubans - Ranger/Ritualist - Factions, escaped the monastery to run around in Kaineng - or in Istan, or elsewhere - Tiger pet 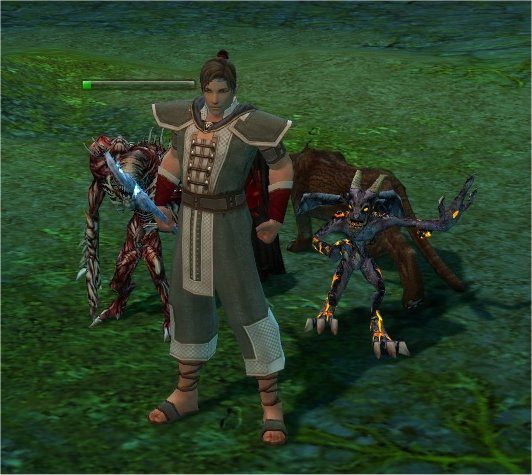 Ami Des Mammouths - Monk - Prophecies, preparing to leave Pre-Searing Ascalon having discovered the secret to having a ranger pet and a necromancer minion while being a primary monk 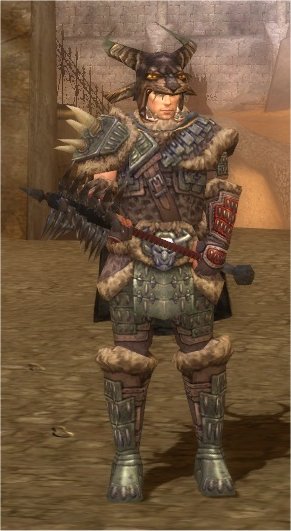 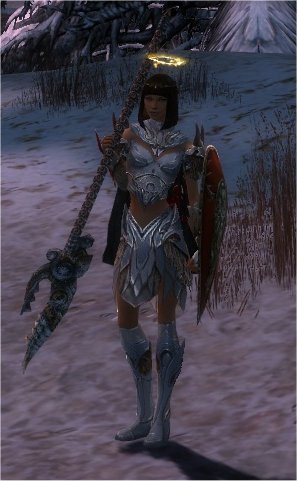 Cleopatra Aegyptus - Paragon/Warrior - Nightfall - currently in EotN getting ready to do in Cyndr, that'll be fun (not) - Survivor(1), Slayer of Wurms(5), Stealth Agent(3), Not Too Annoying(5) - Norn Spear, Norn shield, four pieces of Norn armour (notice a theme here?), and a pair of shades - Miniature Burning Titan for her first birthday 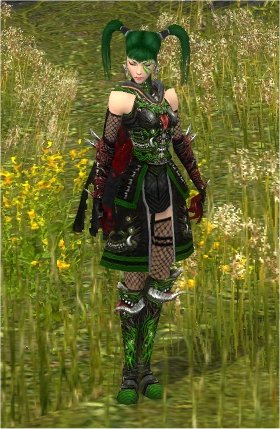 Manga Girl Gone Bad - Necromancer/Mesmer - Factions, preparing to do Zen Daijun - that's "gone to the Dark Side", not anything X rated

Kylarina Quatre - Ranger - Nightfall, working up through the beginning parts around Kamadan - "quatre" (four) because I have three characters called Kylarina (composite of Kylara and Katerina) in other games - Flamingo pet

I wrote a Python script to generate new totals for the Gift of the Traveler/Drop rate page.

Results of a survey: where can you have a primary and secondary profession that are both not Ranger, and still have a pet?

In essence, the only place this can be done is an explorable area where there is an NPC who changes your secondary profession to something not Ranger while you have a pet-carrying skill equipped. Pre-Searing characters who want to do this cannot change to Monk, because Brother Mhenlo stands in an outpost. The six core professions can be switched to later in Prophecies, but the zones where this happens are also outposts, as are the Great Temple of Balthazar and Senji's Corner.

The Command Post is the only place where secondary Rangers can do this - the other six locations can only be used by new characters who try out Ranger skills then select another profession. I have a screen-shot somewhere of a primary Monk with a minion and a pet! (This, by the way, is only possible in the Catacombs or Churrhir Fields, by switching from experimental ranger to either experimental or full-time secondary necromancer, then finding a corpse and creating a minion from it. Furthermore, it is possible in Churrhir Fields to have a pet, a minion, and a pair of professions neither of which is either Necromancer or Ranger.)

Speaking of secondary professions... We know it is possible to be level 20 without a secondary profession. For Prophecies characters, it's just tedious, and used to involve lots of death levelling. For Factions characters, don't forget that there are some level 15 Crimson Skull in Panjiang Peninsula, so you can get to level 20 without death levelling. Note that you cannot leave the western side of Shing Jea Island without doing Minister Cho's Estate, and you cannot do that without taking a secondary profession. Nightfall characters have it easy. Get to level 10, then take the Hole of Istan quest from Bendah and stomp on the Snow Wurms until you are level 20. For reasonably skilled players, it isn't even hard to do this while staying alive. Also, Nightfall characters can acquire Mercenary Heroes in Kamadan, which also makes life easier.

Did you know that the black parts of female Necromancer Monument armor, despite initial appearances, aren't very black at all? To show this, wear Vabbian boots instead. The black parts of them are properly black, and make the Monument stuff look positively washed out...

Bah, that's not true. Any antialiasing at all dropped the frame rate to 45fps while in the secret garden, but it didn't matter whether it was 2X or 4X.

I've been playing a bit less Guild Wars recently, because I wanted to try something different, specifically Runes of Magic. Guild Wars needs one thing you can get in RoM: the Aggregator. Imagine, you've found a weapon with rubbish stats but a cool skin, like the Spiked War Hammer (Mystere Des Os has one of these, found in the Northlands. By pre-Searing standards, it's not bad, but it's pretty lame by the standards of top-end weapons), and a weapon with a severely dull skin but awesome stats. What to do? In RoM, you stick them in an Aggregator, and you are left with one weapon with the cool skin and the awesome stats. Result! (Just be careful not to put them in the other way around, because then you are left with the dull skin and the rubbish stats.)

Charr group names in the Northlands:

The Cup is, of course, the cauldron at the top of the altar.

The charr themselves are axe guys, sword guys, chasseurs (French: hunters), chaots, shamans and griffies (from French Griffe = Claw). The bosses are known by their first names, Blaze, Ghast, Red-eye, and Jaw.

Skills, or rather, no skills[edit]

Characters with no skills, except for some specific things, don't benefit significantly from spending attribute points. Those things are:

All other special benefits of attributes relate only to the use of skills.

What else does Runes of Magic have that GW does not? A quest locator. In any zone you can click a button on the map display and get a list of quests available to your character in this zone. You can then click on one of them and get a quest-marker to show you where to go to get it.

But on the other hand, if you start casting a spell at a mob, and during the casting time, the mob walks out of spell range, in Guild Wars the spell still works, but in RoM, it fails.

The items offered by the /bonus command are just weird, especially when used in pre-Searing. For pS characters, the obvious choices are to take the feathered bow for rangers, the spiked shield or the Rhino's Charge hammer for warriors, and the Soul Shrieker for all spellcasters, especially when you don't have enough attribute points to get 9 in the relevant attribute for one of the other items. However, you can also create a very effective caster/Ranger using the bow, able to one-shot level 1 Skale at level 11 or so while retaining a good power reserve in the caster-profession's attributes. But overall, the weirdest thing is definitely the selection of objects available for warriors. Seriously, a hammer (two-handed weapon) and a shield (only usable with one-handed weapons), while the Hammer Mastery skill set available in pS contains only one skill, and that skill is a relatively expensive adrenaline-powered skill, so most fights are over before it is ready.

A man by this name lived in mediaeval England. He probably could not have told you the correct spelling of his name, as literacy was relatively uncommon among 13th/14th Century English peasants, and I'm pretty sure that I haven't spelled it the way that the records showed. What records, though?

He enters the historical record following a dispute with the local authorities. A little background: a manor at the time was typically ruled by a lord of some sort, and administered on a day-to-day basis by two officials, the steward and the reeve. Both, ultimately, were appointed by or on behalf of the lord, but the steward was, in effect, the lord's representative, while the reeve was the people's. The steward would have been able to read and write, while the reeve, being one of the peasants, would most likely have been illiterate.

Anyway, the post of reeve carried heavy responsibilities, and it appears from the historical record generally that being appointed reeve was often not particularly welcome, in part because of the responsibilities but also because it confirmed absolutely your status as a peasant. Certainly Reynbird was not happy about it. The origin of the dispute is not clear, but on the night in question, Reynbird gathered together a bunch of his fellow peasants, and visited the steward to convey his displeasure at being made reeve.

What multitude of sins hides behind those words? The peasants assaulted the steward, set fire to his barn, molested his horses, and killed his cockerel. The festivities finished with Reynbird threatening the steward with an axe to extract a promise that he would no longer be reeve.

I am the leader of Guild:The Bloodstained Hand.

Being English, I naturally live in France and of course play mostly in the French districts of the game.