Five hundred years ago, Canthan forests began, one-by-one, to shrivel and turn black, all life within them sucked dry. Zojun, a legendary Ranger even then, sought to discover the cause of the forests' destruction and eventually discovered that an evil wizard, Magadore, was sucking life from Cantha's forests and converting it to magical energy, which he planned to use to power a great magical war against the Canthan emperor. Zojun called upon his fellow Rangers, and together they swept through Cantha's remaining forests, charming every beast of any size that crossed their path. Legends tell of a great bestial army that thundered across the land and grew in size until every creature in Cantha had joined its ranks. When the Rangers and their allies arrived at the entrance to Magadore's lair, the sheer weight of their numbers collapsed the earth and Magadore was crushed beneath them. The life he had stolen rose up out of the ground and returned to the forests, which instantly flourished once again.

Zojun is one of several Canthan Heroes whose spirit dwells in the Tahnnakai Temple, giving advice to those who seek it.

Defeated by Shiro Tagachi when the Betrayer attack the temple, Zojun is saved from within the Bound Zojun construct thanks to the efforts of Master Togo, Mhenlo and the player characters. He offers advice through the campaign. 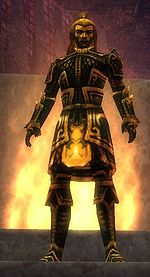 Zojun's statue in the temple

"Once I led an entire army of charmed creatures against a powerful wizard and defeated him without firing a single arrow... but that was long ago. Now I am bound to this construct and unable to control my own actions..."

"This Shiro is an evil presence. Would that you had my assistance to help you, we could end his reign. Still, you will have to press on without me. I wish you luck; you will need it."

"My blessings have helped carry you thus far. Never let it be said that the favor of Canthan heroes is a useless thing. I will continue to let my fortune smile upon you."

"Another victory. With every move, you impress me. But Shiro still must be dealt with. These powerful artifacts of the Luxons and Kurzicks will aid you. If only I could lend my aid as well, this Shiro would have been vanquished long ago."

"Both of the great artifacts have been destroyed? Apparently, this Shiro is more powerful than I first suspected. Would that I were not trapped here in Tahnnakai Temple, or I would see to it personally that Shiro were destroyed."

"You continue to succeed against all odds. Let us pray that your attacks will carry the strength of my bow, so that Shiro might bow down to your might and end this foolishness. The Kurzicks will make a powerful ally... With their help, perhaps you can find the mighty Dragon known as Kuunavang. She lives in the Unwaking Waters."

"Improbably, your efforts succeed again. Let us pray that your attacks will fly at Shiro with the trueness of my arrows, so that they find their way to Shiro's black heart. The Luxons may aid you well... Perhaps they can help you find the mighty dragon known as Kuunavang. She lives in the Unwaking Waters."

"Kuunavang was corrupted by Shiro, and yet you managed to free her from his powerful grip? Who are you? The gods themselves must steer your minds and bolster your strength."

"Perhaps it was only fortune that brought you this far. The loss of Togo is a sign that all hope is lost. I lend you my strength, but it comes with a heavy heart knowing that on your own, Shiro will strike you down. If only I could... Well, good luck to you."

"By Melandru's resilience, you have done it! I never doubted your resolve, or your abilities. This will go down in history as a deed nearly as great as the defeat of Magadore. Congratulations are certainly in order."