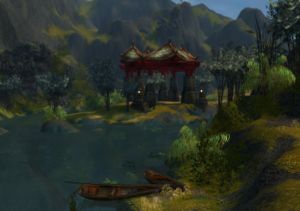 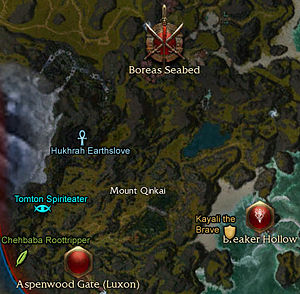 Mount Qinkai Speed Clear, or (MQSC), is a fast luxon faction farm (FFF) which uses separated teams, usually pairs of smiter+600 tank, Spirit spammers, or multiple solo VoS Dervishs, in order to vanquish Mount Qinkai in Hard Mode from Aspenwood Gate. Faction reward is approximatively 10k and takes anywhere from 4 to 15 minutes, depending on the tactics and amount of players. This translates to an average of 40,000-100,000 Luxon Faction per hour depending on the team. MQSC with prepared teams is currently the quickest way to farm luxon faction, assuming you don't spend too much time building your team and do multiple runs in a row with the same team.

Whilst the builds may sometimes vary, the three "routes" rarely change, as they are the shortest paths allowing to encounter all foes of a certain type of the map:

Leave from Aspenwood Gate (Luxon). All players must have 100g for the blessing at the shrine (150g if their kurzick faction is higher than their luxon faction). 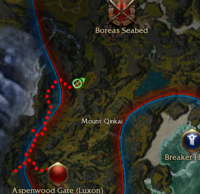 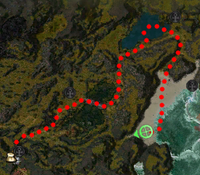 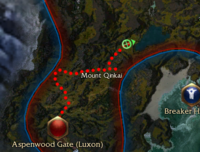 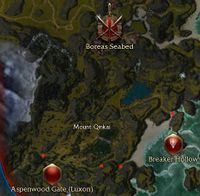 Follow the western part of the map and kill the several yetis. Go first for the ranger boss, then move north and defeat the ritualist boss. It is possible to also kill the nearby wallow patrol to lighten the job of the wallow team, but not advised if you can't protect from their knockdowns. Once everything is dead, head north towards the cave. You will encounter wallows fighting yetis at the entrance. Either ignore them if you can, or kill them (always focus on the wallows as their life stealing and knockdowns are troublesome). Enter the cave and kill all the yetis and their monk boss. If someone in team has the relevant quest, a warrior boss will also join the fight. Leave the grotto by the eastern exit and kill the last two-three groups of yetis.

None of the foes can remove enchantments. The yetis can knockdown with Yeti Smash if you're suffering from a condition (such as Weakness or Poison if you aggroed some wallows). The ritualists yetis use Pain (which transitively increases their aggro range) and Consume Soul, which is deadly to spirits, especially coming from the ritualist boss: Spirit spammers are not advised.

If having casters, remove any condition immediately if someone gets one, as the nagas can cause dazed. Go straight to the first naga group right before the bridge. When that group is killed, proceed to the wallow patrol past the bridge and defeat it. The wallows can knockdown and use a touch life-stealing skill: this is the runner's job to help reduce the troubles from those, using "Brace Yourself!" and "Can't Touch This!" (CTT) respectively. Follow the northern path and reach the lake. This is where the runner leaves to do its job separately. The beach team must kill all enemies in the lake. Be it runner or beach team, always go to the beach using the shortest path. If you go too far north, you may encounter oni pop-ups. There is a naga group as soon as you reach the beach. The runner will have to go through the group while the beach team must kill them. The runner must aggro both naga groups and Kayali's group so that by the time the team reaches the end of the beach only a handful of foes remains, most of which can be easily defeated.

Go towards the Island Guardian but do not attack it before having killed the two patrolling groups of wallows to the east (the one on a lower height can be pulled with a bow). Wallows are dangerous foes, able to knockdown and steal life, while the guardian islands (specific to this route) are able to knockdown with Signet of Judgment and heal with Healing Seed, Healing Breeze and Divine Intervention. After the first Island Guardian is killed, move north and kill a second one, close to the entrance of the yeti cave. Then go east and kill the third one and its surrounding wallow patrols. The route ends when progressing toward the north again, at the point where you reach the lake. Here you'll find the fourth and last Island Guardian and two wallow patrols near it.

It is possible, albeit not necessary, to kill Oni (see the spawning points on the map to the right) and charmable animals (such as Tigers) to further increase the total number of kills and therefore the faction earned. Killing charmable animals shouldn't be difficult, however killing Oni is another story.

Oni use Demonic Agility which allows them to always double strike, resulting in a very fast exhaustion of Spirit Bond's uses. Their Shadow Shroud elite is extremely bothersome, as it will prevent anyone to use any enchantment targeting an ally on the hexed member (this includes common skills such as Protective Spirit, Spirit Bond, Holy Wrath or Shield of Judgment). If utilizing any, it is therefore advised to precast those before engaging.