When the gods walked Tyria a thousand years ago, the Ritualist Kaolai, an old man even then, challenged Balthazar to a game of Nui in exchange for sparing a village that had offended the god through some long-forgotten breach of etiquette. Balthazar laughingly accepted and the game began. Seven days later it ended with Kaolai the winner; the villagers were spared. But in a fit of anger, Balthazar slew Kaolai. Afterward, in a rare gesture of sportsmanship, the god ordered Kaolai inducted into Tahnnakai Temple.

Kaolai is one of several Canthan Heroes whose spirit dwells in the Tahnnakai Temple, giving advice to those who seek it.

When Shiro Tagachi attacked the temple with his army of Afflicted, Kaolai is one of the spirits bound within one of Shiro's constructs. Freed by Master Togo, Mhenlo and the player characters, Kaolai remains within the Tahnnakai Temple offering advice until being replaced by Master Togo. 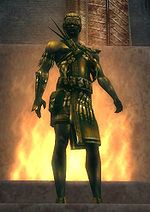 Kaolai's statue in the temple

"I know not who I am, but somehow I know this: you must now travel to Deadwood Fall and retrieve the Urn of Saint Viktor from Kurzick House zu Heltzer"

"Now you must battle the Luxon tribes and earn the right to carry the Spear of Archimorus."

"Shiro lies in wait for you in the Sunjiang District. Destroy the spirit rift he has created, and then drive him from that place."

"You must now earn the full trust of either the Luxon or Kurzick peoples. Fight for them, and they will grant you access to the Dragon known as Kuunavang."

"So you have defended the Kurzick tree singers from the plague. Now lead the Kurzick people to the Unwaking Waters."

"By escorting the turtles of Gyala Hatchery, you have earned the trust of the Luxons. Let them show you the way to the Unwaking Waters."

"Kuunavang is now free of Shiro's grasp. Travel to the emperor's palace, and Kuunavang will grant you the power to fight Shiro."

"I foresaw Togo's death. My time here is at an end. Togo will soon release me of my duties here. Go now to the final battle with Shiro and defeat him."