Karei was a powerful healer who lived seven hundred years ago. For most of his life, he tended a small village in northern Cantha, curing ills and setting broken bones, refusing pay and accepting only food and basic supplies from the community. One day a wealthy Canthan noble and his small entourage passed by Karei's village and were attacked by bandits in the nearby woods. The noble suffered a grievous wound, and after killing the bandits, his guards brought him to Karei, who healed him easily. When the wealthy man attempted to pay him in gold, the Monk refused. Next the noble offered Karei employment on his lavish estate; again the Monk refused. Finally, the noble offered to give the Monk great powers that would make him a god among men, but Karei would not be moved. Smiling, the noble stood and let his cloak fall away, and as he did, he was transformed into a beautiful woman. The goddess Dwayna herself stood before Karei and placed a hand upon his head. "Thrice I have tempted you and thrice you have resisted. I choose you." Called by his goddess, Karei could not refuse his new appointment as Master of the Kaziin Monastery, where he lived out his days training young Monks and healing any sick or broken who came his way. Upon his death, Dwayna herself inducted him into Tahnnakai.

Karei is one of several Canthan Heroes whose spirit dwells in the Tahnnakai Temple, giving advice to those who seek it.

Karei is trapped within a construct during Shiro Tagachi's attack on the temple. With the defeat of Bound Karei by Master Togo, Mhenlo and others, the former monk is freed, and in returns offers his council through the campaign. 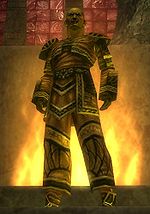 Karei's statue in the temple

"While I lived, I wished only to heal the sick and injured. I never asked for glory. Now look at me... encased in this vile form and forced to do harm..."

"I thank you for freeing me, and I thank you also for what you must do: kill Shiro! But first you must travel to Echovald Forest and gain the sacred Urn of Saint Viktor."

"May Dwayna protect you in your journey to the Jade Sea. The Luxons are a harsh people living in a harsh land. Earning their trust will not be easy, but it will be worth it. Their powerful Spear of Archimorus will surely help you in the battle against Shiro."

"With the Spear of Archemorus, the Urn of Saint Viktor, and the blessing of Dwayna in your arsenal, Shiro is sure to be defeated! If he has created any of his constructs, you must destroy the spirit rifts that are summoning them. Do not forget this advice!"

"Can it be that Dwayna has forsaken us? I was sure that the spear and the urn would be enough! Perhaps she wishes to test you more.... Here is what I suggest: go earn the trust of the Luxons or the Kurzicks, and convince them to join in the battle against the Betrayer."

"Dwayna be praised, you were able to win over the Kurzicks! Their allegiance means much to the cause against Shiro."

"You have honored Dwayna with your deeds thus far. Let her lead you and the Luxons into battle against Shiro."

"Thank Dwayna you have survived! The city is nearly overrun with Shiro's plague army. I pray you will be able to stop him. Know this: Kuunavang will provide you with the power to defeat Shiro. Dwayna, of course, will do the rest, as she always does...."

"All mourn the loss of Togo. He was a good and honorable man. Nothing can undo what Shiro has done, but you can prevent worse suffering and further casualties. You must rid the world of the Betrayer's presence once and for all. Dwayna's speed on your journey, friend."

"I was sure Dwayna would not forsake us. To see you here confirms my faith in her greatness! As a chosen servant of Dwayna, please accept my thanks."