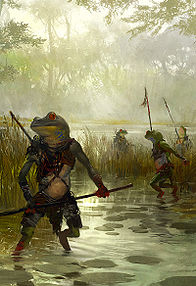 Prolific and belligerent, amphibious heket are a nuisance to anyone traveling across Elona. These creatures thrive in water, but prefer to survive in arid areas. The farther they’re found from their spawning grounds, the darker the days ahead will be. No matter where they claim their territory, heket spawn in alarming quantities. From the moment they’re born, they savage each other as they compete for the few resources in the area. The crude concept of bashing someone on the head for food is instinctual, and heket become more aggressive as they grow larger. Once a region cannot support any more heket, they lurch from their breeding grounds searching for food. By the time a band of them begins attacking human travelers, exterminating them is a public service.

The heket are wide-mouthed "frogmen" with lashing tongues that originated from Elona.[1] Heket's diet consists of insects of various kinds, though they will also eat truffles and fish as well. Heket thrive in all types of "wet" environments, but prefer to live in marshlands. Despite this preference they can be found far away from their spawning grounds. All heket have a set of poison glands filled with deadly toxins, each being immune to their own toxins and a variety of other poisons. Heket are renowned alchemists for their mastery of poisons and antidotes.

Heket come in wide variety of colors with each tribe having a unique color. The color hints at their aggressiveness which correlates to the deadliness of the toxin they produce. Purple/Blue heket are always friendly, green/cyan are mostly friendly, orange/yellow are mostly hostile, and red/magenta are almost always hostile.

Heket are capable of multiplying extremely rapidly. Heket are born in broods as helpless tadpoles in schools of thousands. The early life of a heket is a battle for survival allowing only the strongest and most aggressive heket to survive. The average life span of a heket is relatively short, which often ends prematurely through violence or starvation.

The heket do not have a faith in gods but rather revere the sun as a nameless divine entity, believing it to represent both good and evil. To heket, the sun is the bringer of life-sustaining heat and bounty, as well as the harbinger of drought and famine. They often hold festivals on the solstices to celebrate the waning and waxing of the days' lengths. Heket priests and shamans are masters of reading the sun and the sky and each tribe has at least one priest, if not more. These priests interpret the sun and the sky for weather patterns that could tell when it will rain and how long dry seasons would last. Among the heket, it is often considered that an accurate priest is one of the most important factors for the prosperity of the tribe.

Heket society is divided into individual tribes. Each tribe is led by a single chieftain who has absolute rule. Chieftains often consult the priests and elders for advice in order to keep favor among the tribe. Heket who make it through their harsh lives into old age are deeply respected by the tribe.

The second word of the heket names in Guild Wars Eye of the North seems to be taken from the Aztec classical Nahuatl language. Translated, "Amini" means "to hunt," "Tlamatini" means "wise person," "Nahualli" means "sorceror," and "Cuicana" means "singer." These translations are directly related to the professions, which are Warrior, Mesmer, Ritualist, and Paragon respectively.

In Kourna, heket are often accompanied by Drakes. Heket rangers usually have the Elder Crocodiles as their pets.