One hundred years ago, a demon came to Cantha. He was called Mang, and he found himself flesh after a foolish young Necromancer named Juedo attempted a forbidden ritual and succeeded against all odds. For years Mang terrorized the countryside despite the best efforts Cantha's premiere mages to outsmart him. One winter day, Teinai, then a young bold student, approached her headmaster with a plan. The next day, Teinai herself lured Mang to the shore of a great lake, the surface of which was frozen solid. She walked out onto the ice, and Mang followed, eventually reaching the center while Teinai continued to the other shore. As he did, Teinai raised her hand, and fire rained down upon Mang, melting the ice beneath him. He plunged into the icy lake, and Teinai shrieked a command; the lake froze solid around Mang's thrashing form, and he was trapped. Now lightning and boulders finished the job only Teinai had known how to begin, and Mang was returned to the Underworld. Teinai, after a long and successful life as an Elementalist, was ensconced in Tahnnakai Temple

Teinai is one of several Canthan Heroes whose spirit dwells in the Tahnnakai Temple, giving advice to those who seek it.

Captured by Shiro and forced to serve him through the Bound Teinai construct, Teinai is released thanks to Master Togo and Mhenlo. She then remains in the temple, offering advice on how to best Shiro. 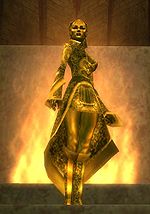 Teinai's statue in the temple

"I have dealt with demons before, but this Shiro is something different. He is a self-made demon, and is constructing more demons to aid his evil cause. He must be stopped."

"Shiro may be gone from this place, but no doubt he has learned what he came for. I fear your battle with him is only beginning."

"With the Urn of Saint Viktor in your possession, you may well be able to protect yourself from the wrath of Shiro's terrible allies."

"Now that you possess the Spear of Archemorus, you have the power to combat Shiro and his followers."

"I feared the worst when I learned that the spear and urn were lost. These were powerful weapons, yes, but the most powerful weapon in our fight against Shiro stands before me right now.... Search inside yourself for the strength to defeat Shiro."

"The Kurzicks make a powerful ally. With their juggernauts on your side, you will be well aided in your struggles."

"Long have the Luxons and their siege turtles trained in the art of battle. Earning their trust should prove a worthwhile step on the way to defeating Shiro."

"With the powers that Kuunavang can lend you, perhaps you can put an end to Shiro at last."

"Even the Elementalists will mourn the loss of a Ritualist as great as Togo. May the fire illuminate his deeds, the air carry his words, the earth rest his bones, and the water cleanse his soul."

"The demon Shiro is truly dead? I hope the power of the elements keep him for all eternity!"