Jaizhanju was an exceptionally tall and very strong young Warrior who lived over three hundred years ago. Orphaned at birth and self-trained, Jaizhanju traveled Cantha and single-handedly defeated bands of monsters that threatened villages all over the countryside. When the emperor invited her to visit him in the Forbidden City so he could reward her, she arrived days late, having stopped to defend an orphanage from a skale invasion. Standing before the emperor's throne, she refused his proffered reward, and instead offered her sword and her life in exchange for the insult of tardiness. The bemused emperor refused her offer, and Jaizhanju continued to defend the weak until her death five years later, by which time legends numbered her kills in the tens of thousands. The emperor himself petitioned the Oracle to give her a place in the Tahnnakai Temple, and so it was.

Jaizhanju is one of several Canthan Heroes whose spirit dwells in the Tahnnakai Temple, giving advice to those who seek it.

When Shiro Tagachi returned in 1072 AE, Jaizhanju was bound within one of Shiro's soul binders during his attack on the temple, making her a bound spirit. However she was eventually freed from the Bound Jaizhanju through the action of Master Togo, Mhenlo and others, and later offered her insight in how to defeat the Betrayer. 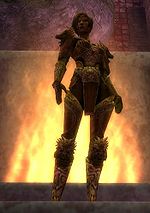 Jaizhanju's statue in the temple

"I dishonored myself only once while I lived, and that was by choice. Never have I allowed evil to control my actions, and I will not begin today!"

"Thank you for rescuing me. If I could, I would offer you my sword to assist you in your task. In its stead, I offer you this advice: Echovald Forest is a dangerous place. Beware the Wardens; they no longer serve to protect the forest."

"Your inner strength shows through in your actions. I thought we might meet again. If it is the Jade Sea you seek, beware of the dangerous Naga. They serve no one but themselves, and they hunt the borders of the sea islands with a vigorous fervor."

"With spear and urn in hand, travel safely toward the Sunjiang District. Shiro awaits you, as does your destiny."

"Remember, defeat is temporary, heroism is eternal. You must not let Shiro destroy Cantha. I may have left your world, but Cantha is still my home."

"Shiro was defeated two hundred years ago when a Canthan, a Kurzick, and a Luxon used their talents together... It was wise to seek out the Kurzicks and gain their assistance. Utilize their friendship to gain access to the Unwaking Waters."

"The Luxons are a powerful people. With their strength behind you, you can enter the Unwaking Waters and seek out the powerful dragon known as Kuunavang."

"With the power granted to you by Kuunavang, you must now save the emperor. Go to his palace and stop Shiro before it is too late!"

"Togo died protecting the emperor, and as long as our emperor lives, the people of Cantha will continue to hold out hope. Shiro is more powerful now, but he is also mortal. Show him what mortality means...."

"Despite my words, I was beginning to think all was lost. You have proved me wrong. You honor all of the heroes of Cantha's past with your deeds this day."