The Rise of the White Mantle

The Rise of the White Mantle is the story of Saul D'Alessio. The mission area can be entered from a copy of Saul's Story obtained from Durmand [Historian] in Lion's Arch, Kaineng Center or Kamadan.

You have to complete the mission one time before this mode is available.

1. Time Trial - You demonstrated how quickly Saul might have slain the enemy commanders and driven the Charr from Kryta

2. Historical Debate - You determined how Saul could have protected the Krytan villagers against the initial attack

3. The Charr Camps - You explored the most dangerous path Saul may have traveled on his way into the Charr war camp.

Your allies on this mission are quite low leveled and go down fast under fire, which can pose a challenge if you are not expecting it; be careful. If Saul dies, the mission is failed. Remember to keep up Mantra of Inscriptions at all times, as your signets are the main damage dealers. 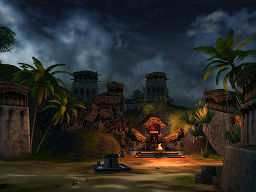 When you spawn, there is only one way to go. Proceed along to the open area where the Charr forces are massed. As you approach, they will begin to move towards you and attack. Simply kill all the Charr without dying (there are a number of helpful items that you can pick up and drop located around the clearing - use these if you are having problems).

An alert meter will appear. It increases slightly when you fight the Charr, and it increases significantly whenever a Charr is killed. If at any time during the mission you let your alert meter fill out, Charr groups will start spawning out of nowhere, so either avoid doing that, or, if you have filled the meter, walk around slowly or you might get easily overwhelmed. The meter will never decrease.

Continue along the path and just keep avoiding the Charr warbands (their patrols make this easy).

How to reach to bosses quickly without a single fight:

After a short cutscene involving the appearance of the Unseen Ones, you must eliminate the rest of the Charr in the main camp. The mission becomes slightly harder here due to the sheer number of enemies and your low levelled allies, but for this portion you will have three Mursaat as allies and access to the Spectral Agony hex.

If you do not run right into the center of the camp, the Charr will helpfully attack in smaller, manageable waves, so you should avoid going past the camp entrance, and instead wait for them to come to you. Ensure that you stay with your Mursaat allies, as they will fight with you, but will not move from their positions. When you have defeated all the Charr, follow the Mursaat into the center of the camp to prepare for the wave of attacks.

It should be noted that the Mursaat are incredibly powerful and can easily handle most waves on their own, if you simply tackle the wave on the right hand side first and then run back to the Mursaat you can kill all the waves easily without risk of death.

There are in total four waves, each with enemies from one of the Charr camps in the map. Each wave is over when its Charr boss is killed:

When all the waves are over, White Mantle soldiers will move to the Charr camp cheering your victory, and the mission will be complete.

You must defeat the very first group of Charrs in the mission before they kill any Krytan villager or child (total 11; the White Mantle Knights may die, though). This Discovery may be done out of simple luck, given how some times the Charr decide to kill the knights before tackling the villagers. Some strategies to help are using “Form Up and Advance!” to lure your own allies to the Charr before they get too close to the villagers, killing the Sootreigners first (thanks to their AoE spells) and using the stun bombs nearby to knock down the enemies. Consider also using rations to keep your tanks alive and protect any villagers that decide to join in on the fight.

You must explore all the five Charr camps in the map. This is by far the most time consuming Discovery, as you will have to fill the alert meter, causing groups of Charr to spawn in multiple locations. The spawns do not appear when the meter is filled – rather, they appear once you have reach specific points in the map. As a result, enemy groups may often appear around you, blocking any escape path. It is important, then, to advance slowly. Each Charr camp has specific kinds of enemies linked to it; those are both the enemies inside the camp and the enemies that will spawn around it. Once you have reached the right place within each camp (see the maps below), you’ll see a message saying:

You’ve discovered X of 5 of the most dangerous locations Saul may have passed through on his way to the Charr leaders.

This is the hardest camp to explore. It is filled with Charr Ash Storms and Charr Sootreigners, the latter deadly to your group thanks to Firestorm and other AoE spells. There is a large army inside the camp, and four more large groups will spawn (two outside, two inside). Be careful to only trigger one group at a time, and be ready to run when necessary – triggering a spawn and running back to safety (the bridge in front of the White Mantle village) is a good strategy here.

Filled with Charr Demolishers, Devourers and Charr Ash Thieves, the main danger in this camp is being overwhelmed by the large group of melee enemies. Be careful to not fight against large groups of Devourers, Charrs and Bone Horrors at the same time, and exploring this camp will be simple.

This camp has a large number of Charr Axe Fiends, with a few Charr Ash Callers. Again, be careful to not aggro too many melee enemies at the same time, and be careful to not be body blocked and therefore unable to escape. Given how most enemies stay close together, Signet of the Unseen is very useful here.

The easiest camp, this one has level 12 Charr Ash Walkers and Charr Ash Bearers. Just stomp through everything in your way.

This is the Charr leader camp. An easy way to explore this camp is by avoiding all enemies until you kill the Charr leaders and the Mursaat come. Once you are fighting against the four Charr waves, move slightly to the west of where the Mursaat stand, and you will receive the message that the location has been found.

During the Charr attack

After the Charr attack

Saul D'Alessio: "Our village is safe and no Charr survived to alert their army of our presence. Our unseen gods are with us!"
Saul D'Alessio: "Crusaders! Mother Kryta cries out in her hour of need. Those of you with families here, take some time to say goodbye."

Saul D'Alessio: "Our time is at hand! We must make our move. Dorian, Hablion, Thommis...my most trusted followers. Should anything happen to me, you must carry on and lead Kryta in the true faith."
Saul D'Alessio: "The Charr leaders are in the command camp at the rear of the Charr army. We must sneak through the army encampments and avoid battle at all costs! We'll never survive if we alert the fighters."

After reaching the bridge

Justiciar Hablion: "This path to the left must lead to the main camp. Dawn approaches. We must move quickly."

Saul D'Alessio: "Be cautious, friends. We are almost there."

If entering the southern sidecamp:

Bryen: We should not dally with these camps. Let's move on.

If entering the western sidecamp:

Jaemes: This camp is irrelevant to our mission. We should press on.

If entering the eastern sidecamp:

Gisinger: This is not the commander's camp. The path is back this way.

If entering the northern sidecamp:

Rebekah: The main camp is right over there. We should not waste time engaging in nuisance fights.

After reaching the entrance to the main camp

Saul D'Alessio: "There's the main camp. We'll find the Charr leaders to the rear, worshipping their blasphemous effigy. Though it may cost us our lives, we must slay them to disrupt their plans. Move cautiously."

Rox Ashreign: "We launch the final assault at first light. Send word for Sootpaws and Emberglow to join me here."
Rox Ashreign: "What is that stench? There are humans here!"

Thommis: "The Charr are mobilizing! We will soon be overrun. This is the end!"
Saul D'Alessio: "Friends, the time of retribution is at hand. We must pray to our gods. They will decide whether we live or die."

After the first cinematic

Optimus Caliph: "You have called us. We have come. Together, we will force these heathens from the kingdom of Kryta."
Optimus Caliph: "But know that our aid comes at a price. Only the truly worthy may see the Unseen and live to tell the tale. And Saul!"
Saul D'Alessio: "Yes, my lords?"
Optimus Caliph: "To you, we give our greatest blessing. Wield it with care, for its effects are devastating."

After defeating the first warband

After defeating the second warband

After defeating the third warband

Saul D'Alessio: "Without their leaders, they're nothing but rabble."

After defeating the final warband

Saul D'Alessio: "That is the last of them!"

During the second cinematic

"The Unseen Ones brought Saul a great victory."
"But their aid came at a price."
"The Unseen Ones killed all but their most devoted worshippers."
"And Saul learned to his horror that these new gods were neither good nor kind."
"The Unseen Ones took Saul with them to ensure his silence."
"He was never seen alive again. But survivors spread the legend..."
"And Saul D'Alessio would always be remembered as a Champion of Kryta."