The Ascalon Royal Family Masquerade Ball took place on May 5th, 2007 in the International Districts of Serenity Temple. The event took up a total of 5 International Districts, and a sixth one beginning to fill. It was considered quite successful despite a few setbacks with movement of staff and the costume contest whereabouts. It is noted for being the largest unofficial community event to date. Donations were accepted openly a week prior to the event. Donations totaled over 1.8 million in raw gold, and an additional 2-3 million gold item based donation. Player cooperation was wonderful, and the event received mostly positive feedback. 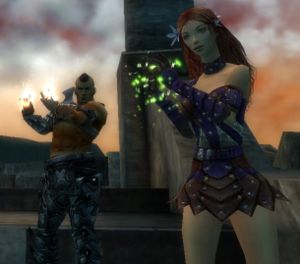 Gaile Gray playing her collector edition flute during the celebration.

Gaile Gray was present during the entire course of the event, minus a short lapse when she took a break. She assisted greatly by acting as a messenger through the full districts, asking people to shuffle to other districts to allow Deux Du Machina, host of the event, into the district. Gaile also used her GM powers to create fireworks in Serenity Temple. She asked a few quiz questions, and seemed to thoroughly enjoy the event. Gaile also helped keep the peace with some of the "not so well behaved guests".

Transcript from the invitation posted on forums[edit] 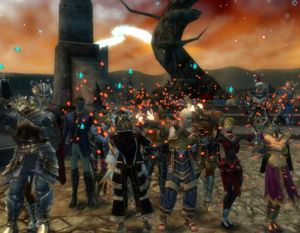 Hosted by the honorable Deux Du Machina (Lord Sojar), 3rd Lord of the Gates of Kryta.

"The Ascalon Royal Family Masquerade Ball is a long forgotten formal event, engraved into history years before the searing. The Ascalon Royal Family led by King Adelbern was once a prosperous kingdom, and the ball was the yearly celebration to celebrate the wealthy and beauty that was Ascalon. But alas, The Searing as it has come to be known shattered the hearts of men in the kingdom of Ascalon. The ball for the past 4 years has been forgotten. Lord Sojar, in his travels, stumbled upon an old text depicting a dance festival of epic proportions in the kingdom of Ascalon of old. Intrigued, he did further research. After painstaking tasks, Lord Sojar begged the wealthiest of the lords of Ascalon and surrounding kingdom of Kryta to donate what they saw fit to bring back this beautiful festival. The time of the Ascalon Royal Family Masquerade Ball has returned, and the hearts of men shall once again be warm and lively! Let the festivities commence!": 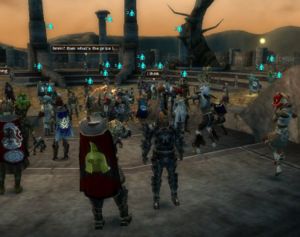 "The theme of this years Ascalon Royal Family Masquerade Ball is… Change."

"Yes, Change. Why change you ask? Think of what our world of Tyria has gone through in these last 4 years… think long and hard. Change has happened! First, The Searing ripped the Kingdom of Ascalon apart, then the Stone Summit ripped the Kingdom of Deldrimor apart, and finally the ancient and undead Kingdom of Orr sought to uprise and destroy the Kingdom of Kryta. Across the seas, our friends the Kurzicks and the Luxons rage war against one another daily. Shiro, the evil Undead Lich, Abaddon's uprising, the undead armies, the Charr, Kormir, the gods, Heroes, Champions, and Mhenlo and Cynn… many changes have occurred in these years, and those changes have formed what we know the world of Tyria to be today. We should embrace these changes, and push on into the future, the future that is so bright and always changing! May the gods' blessings be with you each and everyday that these wonderful changes occur, and may you all change the world!"

(All times listed in GMT below)
The event Schedule was as follows:

The external links below will help to give a concept of how large the event was, especially the videos.