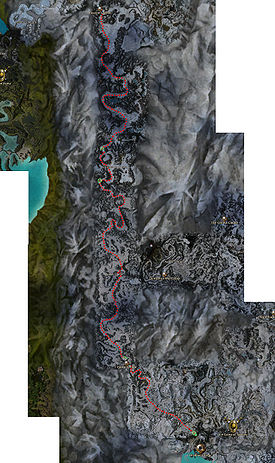 Map of the run's path

The Droknar's Forge run (often shortened to Drok's run and Droks run) is arguably the most well-known and popular run in the game. It's the easiest and quickest method to get to Droknar's Forge without Ascension, and in turn prior to Factions, was the quickest means of obtaining max armor.

The run begins from Beacon's Perch in the Northern Shiverpeaks and goes through Lornar's Pass, Dreadnought's Drift and Snake Dance into Camp Rankor. From there, continue through Talus Chute to reach Droknar's Forge. The run is long and somewhat difficult due to deadly combinations and high concentrations of foes in the aforementioned areas.

Most builds, therefore, use a combination of hex counter (Shadow Form or Vow of Silence) and high speed with shadow steps to make it through as fast as possible. Due to Ice Wurms and Tundra Giants, runners also often bring skills to counter knockdown, such as Dwarven Stability (while drunk) and/or "I Am Unstoppable!"

The run usually takes about 10-25 minutes depending on the skill of the runner and what build the runner is using. Common professions include the warrior, dervish, and assassin but it is also ran on other professions.

Since the release of Factions and later Eye of the North, armorers at Kaineng Center in Cantha (by completing Mhenlo's Request) and Boreal Station in Far Shiverpeaks (by completing What Lies Beneath) can easily be accessed from Lion's Arch. However, the run regained popularity for players seeking: