The Vabbi Tour takes players to every outpost in the region of Vabbi. This run usually starts in either Sunspear Sanctuary or Gate of Desolation and continues through the Desolation, Vabbi, and ending in Kourna's Moddok Crevice.

The goals of this run are for players as low as level 4 to quickly obtain Vabbian armor for their character, to have all the Vabbian outposts for faster completion of the Nightfall campaign, as well as premature access for accelerated completion of the Cartographer and Vanquisher title tracks. Vabbi tour requires a skilled runner due to the fact that the Desolation (an area plagued by Sulfurous Haze) must be ran on foot. The Junundu wurm cannot be utilized because players who are looking for this run most likely do not have the Gate of Desolation mission completed. Every party member must have the Gate of Desolation mission completed in order for the wurms to be used. See Desolation Run for an overview of what this portion of the run entitles.

Players enter Vabbi through Basalt Grotto (the volcanically dormant outpost that connects Vabbi to the Desolation). The run continues through a few Vabbian zones until arrival at The Kodash Bazaar. Next, all the outposts in The Mirror of Lyss are obtained, finally progressing down south into Honur Hill and Yahnur Market. The runner now has to conquer a difficult Icedome-like section as they make their way toward Chantry of Secrets. The Vabbi tour continues through Wehhan Terraces and makes its end in the Kourna-Vabbi border outpost Moddok Crevice. 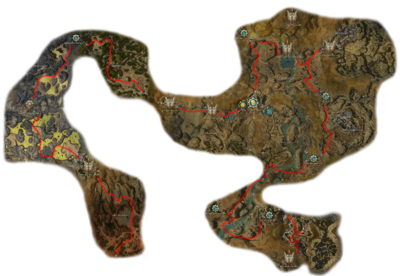 A complete Vabbi tour yields access to the following outposts in order.

The Vabbi tour can be completed in as little as 25-29 minutes by a highly skilled runner and in upwards of 30-45 minutes by lesser-skilled players.

Guide to Running the Vabbi Tour[edit]

Although the tour can theoretically be followed by any profession combination, experienced runners recommend three (with two others considered as fine):