This article is about the event. For the cinematic, see The Searing (cinematic). 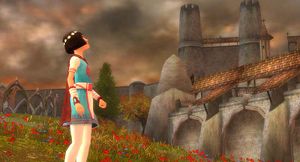 Gwen right before the Searing.

Following the defeat of Vatlaaw Doomtooth at the hands of Prince Rurik, the Charr called forth a destructive power that became known as the Searing. Using the Cauldron of Cataclysm and the power of their Titan gods, the Charr shaman Bonfaaz Burntfur summoned forth a devastating magic that rained down burning crystals on Ascalon. The regions impacted by the Searing ranged from lands far north of The Great Northern Wall to the Blazeridge Mountains. However, the Searing was arguably most devastating to Ascalon City, Rin, and Surmia. Ironically the most intact structure following the Searing was the Great Northern Wall. Parts of the Shiverpeak Mountains were likewise affected by the cataclysmic change in climate, causing areas that had at one point enjoyed frequent snowfall to turn barren.

The Searing was devastating to both the human kingdom of Ascalon and the land itself. Upheavals and craters reshaped the landscape while fires burnt away the lush forests and fields, leaving barren rock and ash-clogged fields. Water vanished from the rivers and lakes, some being replaced with tar, and without the plantlife to sustain them, all but the heartiest animals died out. Cities were reduced to ruins and villages were all but eradicated.

Once the embers settled, the Charr were able to overcome the Great Northern Wall and march through Ascalon to Orr. The ramifications of The Searing and the following invasion forever changed the position of humans as the dominant race on the continent of Tyria as it opened the way for the Charr to march to Arah which indirectly brought about the Cataclysm.

The Searing broke the once proud kingdom of Ascalon, leaving it an empty husk of its former self and close to collapse. The armies of the Charr proudly marched through Ascalon territory believing that what resistance remained would be easily overcome. Yet those that remained would not yield to the invaders from the north. Even eight years after the Searing, Ascalon's lands south of the Wall still hold out against the Charr. Ascalon's ruler, King Adelbern, still believes his people can survive, though few share his optimism.