Skelk Claws are trophies dropped by Skelk in Eye of the North.

All Skelk in Tarnished Coast attack at melee range, so skills that deal area of effect or point blank area of effect damage are effective against them. 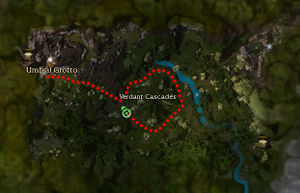 Start from Umbral Grotto and go east-southeast. Once you get past the northern big mountain, venture north but do not cross the river. Instead, work your way back closing a circle.

Most Skelk groups contain three to four foes, with those outside the suggested route having up to six foes and therefore not suggested for solo farming. Additional Skelk groups can be found to the southwest, but are attacked by neighbouring Quetzal as soon as the player enters compass range.