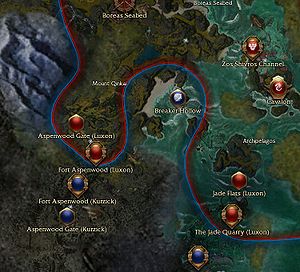 The border is shared by all territories, and is updated every 3 hours, based on the outcome of the last 3 hours of Alliance Battles, as well as momentum from previous rounds of alliance battles. A faction that pushes into enemy territory will temporarily gain a "momentum bonus" that helps it drive the battle line further into enemy territory.

Outpost and town and control[edit]

Outposts or towns are awarded to alliances with preference going to the alliance with the highest amount of faction first. The numbers 1 to 15 indicate the ranking system used (and effectively, list the top 15 faction-accumulating alliances of each faction.) Where the numbers of both Kurzick and Luxon are listed for the same outpost or town, then it is dependent on where the Kurzick-Luxon border is situated at the time. The rank 1–3 outposts/towns cannot be controlled by the opposing faction; e.g. Cavalon cannot be controlled by the Kurzicks.

Owned by: <name of the alliance's lead guild that owns the outpost or town> [<lead guild's tag>]
Faction to control: <amount of faction this alliance currently has> (<allegiance, e.g. Kurzick or Luxon>)