Guide to Legendary Defender of Ascalon 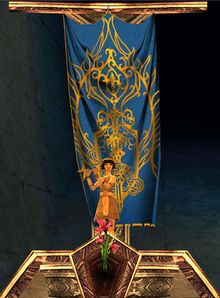 This guide describes the optimal walkthrough to get the title "Legendary Defender of Ascalon".

There are only two ways to get experience in Pre-Searing: foes' deaths and quest rewards.

Experience from quest rewards, however, is fixed. As such, quests should be saved for later to help closing a level where experience from foes is low.

Quests represent from 9,650 to 10,400 XP (source). Due to the presence of charr bosses and the mechanics of vanguard quests, the most difficult level to get experience from foes is 16 to 17. 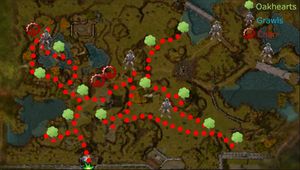 Oakheart Route, Red for Charr that must be avoided

The highest level of foes outside of the Northlands is 5, and foes of that level are few and isolated. There is a fair amount of level 3 foes though, so leveling up to level 7 without going to the explorable area beyond the gate is possible.

The Northlands, however, offer a much higher density of level 5 foes, with a total of 12 different spawn locations of 1-2 Oakhearts around the map (see route on the picture to the right), in addition to grawls and potentially charr (which are high level but more difficult to kill), making it a far superior area for experience.

While it used to be impossible to open the gate without a second player or the use of a speed boost, the June 6, 2018 update made it possible to access the Northlands without any help. Before going through the gate, picking up the quest from Gate Guard Torin will trigger the spawn of three additional grawls and the ally Ben Wolfson.

Despite being level 5, Oakhearts have low damage output and are weak to both slashing and especially fire damage, making them easy to take down quickly with fire wand, axe, sword, bow with Ignite Arrows, Fire Magic skills and/or any pet aside from warthog. Fiery components do exist in pre-Searing, but are hard to find. Regardless of the choice of weapon or skills, the Fire Imp helps tremendously here.

At low level, it is near impossible to kill Charr, but sometimes a group of charr can be almost in the way, and the only solution to avoid aggroing the group is to go around it, usually after waiting for the Charr to gather, then "hugging" the wall. Be especially careful of the second patrol near the ruins. If aggroing a group by mistake, you can try to run away far enough as they will break aggro eventually.

At the end of the run, map travel back to Ascalon City or suicide on a Charr group to get resurrected at the entrance, depending whether you are going for survivor title or want to be faster. Another account can be used to rezone as well. Not using map travel will keep any morale boost acquired.

At level 2 onwards, the quest Charr at the Gate becomes available and can be used to get additional experience. However it requires being abandoned in Ascalon City and picked up again every time.

At level 7 killing Charr becomes feasible for some professions, notably elementalist and mesmer, providing the player takes cover behind walls to obstruct a part of the charr's attacks.

At level 9 killing Charr is feasible by all professions with the Fire Imp and Ben Wolfson, although it can still fail.

If a high level player is helping you, you can tackle the Charr and their bosses directly for vast amounts of experience. This method is known as Power leveling.

Charr in the Northlands have the highest level available at this point and therefore provide the highest amount of experience, making this faster to reach level 10 despite the fact that the experience is divided between the two players.

To earn experience, you need to aggro the group. This can be done by having one foe of a group in detection range at some point, landing an attack or using a spell on a foe. Alternatively, experience gain is also given if using a skill on an ally (e.g. Orison of Healing) if that ally is fighting at the moment the skill is cast. So usually when powerleveling you will want to use Orison of Healing on the high level player right after he takes aggro.

Details of the available options[edit]

At level 10, you gain access to Lieutenant Langmar's quests, which have various properties:

The amount of experience a player can get from a vanguard foe is between 16xp and 200xp (halved with a partner), so it is possible to quickly exceed the 1,000 XP/day limit by killing vanguard foes alone. Since the quests are time-gated, a good practice is to keep the quest until the next one becomes available, to profit from Vanguard Initiate's armor bonus and be able to farm the foes of the quest. Once the new quest is available, you can either hold onto the old quest (if it provides a good farming opportunity), or turn in the completed quest for a straight 1000xp reward and take the next one.

At level 10 you also get access to Halbrik to buy any remaining skill(s) from your secondary profession (if you have one):

Level 10 to 14: Charr bosses and other foes in the way[edit]

Between level 10 and 13, vanguard foes are about the same level as regular Charr foes, the main difference is that regular Charr foes can drop substantial loot. The four Charr bosses, in addition, are high level and are worth double the xp due to their boss status. Since they can be killed together for a significant experience gain (and loot unique to them), Charr bosses are the preferred method for leveling up below level 14. Optimized runs typically focus on the bosses, dealing with regular Charr only when necessary and pulling the bosses away from the altar one by one with a longbow.

It is possible to combine Charr bosses with Vanguard Quests such as Footman Tate rescue, Blazefiend bounty or Charr Champions annihilation to increase the number of foes and therefore experience gain, however focusing on bosses may be actually more effective in terms of ratio experience/time.

After killing the bosses, the simplest way to repeat the run is to map travel to Ascalon City. However it may be a bit faster to alternatively rezone using the gate between the Northlands and Lakeside County. This also allows to keep the acquired Morale Boost. The fastest way as a solo player is to suicide at any of the remaining charr groups, so that you get resurrected near the exit after a 10s timer. If you have a second account or a friend willing to help, you can simply keep another player character next to the exit of the area and have them rezone as soon as the bosses have been killed and any loot claimed.

At level 14 or 15, farming specific vanguard foes is usually the best method. The most interesting quests are:

Any quest reward remaining should be ideally claimed at level 16. The rest is the same as the previous step.