Guide to playing as a paragon 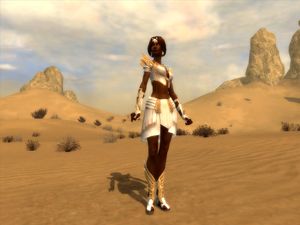 Paragons are ranged support fighters, who specialize in Spears, and several forms of vocal commands, usually Chants, Echoes, and Shouts. Paragons benefit from their primary attribute, Leadership, which gives them energy depending on party size when using their vocal skills and allows these Great Leaders to inspire greatness in others

Effective paragons hardly ever run out of energy. The use of adrenaline chants/shouts, to gain extra energy with the leadership attribute, should be utilized. Also, because of the wide variety of chants/shouts, and the high armor of 80 (plus an additional 16 if including the shield), paragons can make avid healers.

Leadership is the Paragon's primary attribute. Whenever a Paragon uses a Chant or Shout, they gain 2 Energy for each ally affected, up to a maximum of 1 Energy per 2 ranks of Leadership. Leadership skills often relate to adrenaline gain, the Burning condition, defense or attack speed. It also includes Signet of Return, a Paragon resurrection skill.

In PvE, the paragon can shine like no other. In PvE, paragons can use their chants and shouts without ever running out of energy. This is done by controlling the party so it stays within earshot, maximizing the usage of shouts and chants, and maximizing energy regain. At 16 Leadership, a paragon gains 8 energy for every shout or chant they use, providing at least 3 other party members are within earshot. This can be formidably effective when the paragon uses a secondary profession such as elementalist, which needs energy for its spells. Although some shouts and chants cost energy, some of them are adrenaline-based. When the paragon is low on energy, they can use 2 or 3 consecutive adrenaline shouts to fill their energy back up, and keep buffing the party. In PvE, the paragon can increase party-wide damage per second and healing, coupled with spear attacks for added damage; this is most commonly done by a skillset called "Imbagon", short for "Imbalanced Paragon". Imbagon skills include, but are not limited to: Focused Anger, "Save Yourselves!", Spear of Fury, For Great Justice!, There's Nothing to Fear!, and others.

Even though the armor of the Paragon is quite strong, nearly as good as the armor of the Warrior, one should stay behind the Melee characters and use the range of the spear so that the paragon doesn't draw Aggro. A position in the Midline, between Monks and Warriors, is ideal for your Chants and Shouts, too, as they will affect all party members, maximizing the energy gain from Leadership. The short range on your spear will usually put you in the midline.

If you decide to play a paragon in PvP, remember that you grow stronger with the number of teammates. This makes you weak outside of Guild versus Guild and Heroes' Ascent as you cannot use your full potential, even though you still should not be underestimated.

In PvP, the paragon is equally as powerful as his PvE counterpart, but requires more management on the player's part. Since the paragon relies on his earshot range to use his shouts and chants, a party which runs off to attack random targets will be the paragon's poison. This, coupled with the energy-per-ally-within-earshot ability of leadership, can lead to an empty paragon and a mostly unwelcome presence. But, the paragon does possess a great utility in PvP, mainly his wide array of utility buffs. He can speed buff, mitigate damage and run himself, helping the whole party as support. A good team in PvP will always stay close to the paragon, in order to both make use of his chants and shouts, and to ensure the paragon himself stays healthy. A good team sticks together!

As in PvE, you should make sure to stay in the Midline where your Chants and Shouts affect the most teammates so that you gain the maximum benefit from Leadership. Try to constantly pressure the enemy monks from the distance while you use your skills to boost your team's offense and defense. If your team uses focused pressure, it's easiest to just take the calls and auto-attack the target using your spear skills as often as possible. This way you add to the pressure as you are rarely strong enough to kill a target on your own and you do not get distracted from keeping the shouts up. Of course when you get more experienced, you will know how to pressure a target on your own, allowing you to attack on your own.

A paragon can easily mitigate damage using a combination of his armor, weapons, and skill choice. Using his inherent 80 armor, Centurion insignias, a shield (bearing in mind that a 15 AL shield can mitigate attribute spread by having a requirement as low as 7 with an insignificant disadvantage of -1 AL) with +30 health and +10 AL vs the damage type you expect to face (usually fire, from skills such as Searing Heat, or slashing, if NPC melee breaks through your frontline), and a +30 hp spear with a "Strength and Honor" inscription can grant the paragon approximately 600 health and 110 AL. This makes the paragon quite resilient, however, unlike the warrior, the paragon has few self-defense/healing skills. This means that he has to rely on his equipment and his team to keep him alive rather than his own skills. The paragon's partywide defensive buffs can be used to protect himself as well of course, but they tend to be costly whenever the paragon is alone.

Playing as a paragon, you're one of the few hybrid support/damage professions. You can boost your team with your chants and shouts, and also deal significant damage with a spear. Paragons have better than average unmodded damage per second in the game. Many Paragon builds involve either (party-wide) offense or defense, and it's really up to personal preference to which is used. Paragons, however, should not be looked at as another monk profession, because is it very difficult for a paragon to support a group as efficiently as a monk can. However, multiple paragons can make playing in even the most difficult areas seem easier.

Avoid being alone at all costs. A paragon's effectiveness can be greatly compromised when lacking party members to support or to gain energy return from with Leadership. The key to this could be to ensure you stay within party range at all times. This goes for survival as well: the Paragon has few 'solo' skills and none of them are well suited for prolonged periods of isolation. If you have to split up, try to stay with the largest group. You never fight alone is more than just a phrase to a Paragon, because everything other than spear attacks rely on allies being nearby.

Also, avoid making a Paragon an attack-only element in the team, because its special skills and abilities in motivation/healing are far more useful for the team than just another ranged attacker.

A third thing to keep in mind is your adrenaline. Adrenaline is vitally important to most Paragon builds (even more so than it is to a Warrior), because through your adrenaline shouts/chants you also regain your energy. Be especially careful to avoid blindness, block and other things that deny you your adrenaline because they can cripple your ability to aid your team.

Using skills like "Go for the Eyes!" or Anthem of Flame from the Command and Leadership attribute respectively, a Paragon can strengthen the attacks of the party or allies in earshot. Anthem of Fury or Zealous Anthem can help fuel the frontline's attacks.

Skills such as "Stand Your Ground!", Defensive Anthem, and Bladeturn Refrain can help protect a Paragon's allies. "They're on Fire!" can be very powerful when used in combination with a fire elementalist.

In PvE, paragons can use the skills "Save Yourselves!" and "There's Nothing To Fear!", along with attack speed and adrenaline boosting skills, to render their party nearly invincible. Aggressive Refrain is a popular attack speed skill, and "For Great Justice!", Focused Anger and Spear of Fury (accompanied by Anthem of Weariness) are common adrenaline gain skills. Paragons using this tactic are often known as imbagons.

A Paragon specializing in Motivation can effectively remove all conditions from single allies or the entire party. Skills like Cautery Signet, "It's just a flesh wound." and Song of Purification can be used to continually keep your party condition-free while spending minimal energy.

Paragons can provide nearly party wide energy gain with skills such as Aria of Zeal and "Never Give Up!". Energizing Finale provides energy for the whole party. Song of Power is effective at reducing downtime after long battles.

Most Paragons choose Warrior as their secondary profession, as both professions have adrenaline-based and adrenaline-gaining skills.

In PvP, Paragons often choose Mesmer or Necromancer as their secondary profession for enchantment removal and utility skills.