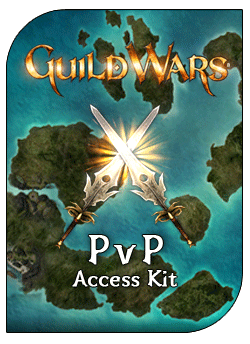 The PvP Access Kit is a standalone product that can either be used to create a new account or added to an existing account. It grants access to all the professions, skills (except PvE-only skills), upgrades, and heroes in the game, but only in PvP areas. Skills, heroes, and upgrades will still need to be unlocked before they can be used. The kit also provides access to the PvP areas of the game.

Gain instant access to the Player versus Player portion of Guild Wars with the new PvP Access Kit. This package contains everything you need to jump right into the competitive world of Guild Wars PvP! No other Guild Wars purchase necessary.

Create and play PvP-Only characters from any of ten Guild Wars professions across all three campaigns (Warning: Access to Roleplaying characters requires purchase of a Guild Wars campaign.)

Characters of every profession are able to be created as PvP-only characters. The available professions are:

Every skill that is useable in PvP becomes available to unlock.

Each new character created will receive some default skills, although these will not be unlocked for use as secondary profession skills on other characters.

20 normal skills and 20 elite skills can be unlocked free of charge. Once these free unlocks have been used, skills may continue to be unlocked by spending Balthazar faction or purchasing a Skill Unlock Pack.

Note that since PvE-only skills can only be learned by Roleplaying characters and cannot be unlocked, it is not possible for PvP characters to learn or use these skills.

Every upgrade component becomes available to unlock. Some items and upgrades are initially unlocked by default.

20 upgrade components can be unlocked free of charge. Once these free unlocks have been used, items may continue to be unlocked by spending Balthazar faction or by purchasing the PvP Item Unlock Pack.

All heroes become available to unlock.

Koss, Dunkoro, and Acolyte Jin are unlocked initially by default.

Each additional hero may be unlocked using Balthazar faction.

Unlike the campaigns, the PvP access kit does not provide the following:

The main advantage of the PvP Access Kit is that it provides instant PvP access to all of the professions, and ability to unlock all of the skills and heroes without the need to purchase the relevant campaigns.

If one or more campaigns are owned, but not all, the following needs to be considered when considering buying the PvP Access kit:

If none of the campaigns are owned and the kit is used to make a new account, it will give instant PvP access. However it should be noted that purchasing any of the roleplaying campaigns will also give the account access to unlock the professions and skills of that campaign for PvP use, so the benefits of this kit diminish as more PvE campaigns are added to the account.