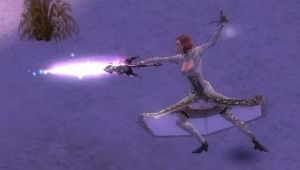 An IW mesmer refers to a Mesmer build based around the skill Illusionary Weaponry. It has not seen much use since the May 21, 2010 game update, which overhauled the profession.

Illusionary Weaponry allows a caster to inflict respectable amounts of melee-range damage that cannot miss or be blocked, since the caster's actions do not count as attacks. This also allowed the skill to serve as a cornerstone for Mesmer solo builds.

There are three typical ways to play an IW mesmer: