Minotaur Horn is a trophy that drops from Minotaurs.

Minotaurs can be found in the beginning of the mission. The Splinter Mines are effective to take out large groups of Minotaurs. 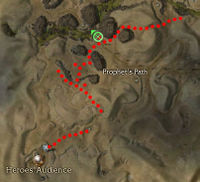 Leave Heroes' Audience and head to the northeast teleporter, along the most straightforward route there will be just 2 popups of Jade Scarabs and Rockshot Devourers. Use the teleporter to cross and follow the path to get all the Minotaur groups, including 2 bosses. The Minotaurs sometimes fight groups of Jade Scarabs, so do not wait too long before engaging these groups after spotting them or they may die before you get there. The farm is relatively safe and mostly consists of Minotaurs if you stick to the path, but you will encounter some popups of Jade Scarabs and Rockshot Devourers.

An average run yields approximately 5 Minotaur Horns. Additionally, the player marker on the map is the spot where Nicholas the Traveler will be if he is asking for Minotaur Horns.