Differences between the Survivor titles in pre-Searing[edit]

There is a gap between Survivor, Indomitable Survivor and Legendary Survivor. Survivor is basically a Legendary Defender of Ascalon without death, and is easier overall because of various reasons :

Fighting Ice Elementals and Oakhearts (and other low-level foes) with the Fire Imp is generally risk free. Beware of your imp always having a clear line of sight. Avoid confronting Charr and do not hesitate to fall back or even log out whenever you feel overwhelmed. A maximum shield such as the Serrated Shield can increase your survival abilities greatly. Power leveling is also a good way to get a lot of experience but has a higher risk.

At this level, you can restart rather fast should you die.

At level 10 and above the character can take the daily vanguard quests to spawn high-level foes and get a daily 1000xp. The quest also provides a bonus, "Vanguard Initiate". To keep the bonus and to spawn the vanguard foes, you should refrain from doing the vanguard quest on the LSoA until the next one becomes available.

Below level 14, killing the Charr bosses will usually be very fast and high-rewarding in terms of both drops and experience and is therefore a good solution, albeit being dangerous for a survivor character.

At level 20 you lose your power to summon the Fire Imp. From now on any computer crash or lag when fighting vanguard foes or even regular foes, if the duration of the disconnect is long enough, is equal to death. As such, avoid facing Charr and even low-level foes.

Getting only the daily vanguard quest reward with a runner completing the quest for you provides a regular and solid basis of 1000xp/day for an average time of 10min/quest, but requires to play everyday for several years (~2 years for r2 and 4 years for r3).

The quest runner should preferably be a Mesmer due to their overall strength and access to Empathy and Backfire which are very useful for vanguard quests (bounties and annihilations especially). Level 10 is required for the vanguard foes and NPCs to spawn. Fire Imp is advised. Using Birthday Cupcakes can speed up some runs, notably the bandit annihilation.

The Way of the Fire Imp[edit] 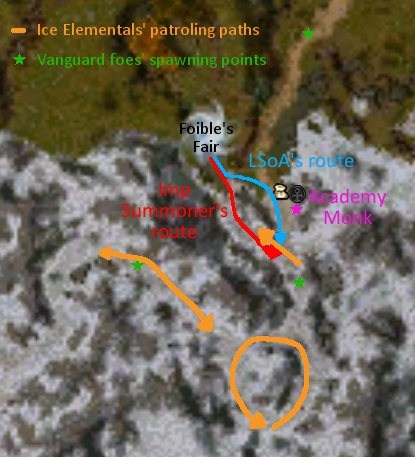 The Way of the Fire Imp Video on YouTube

Main idea: The Fire Imp is an extremely powerful ally, but it cannot be summoned at level 20. The idea is to use a level 19 secondary character to summon it and then die in combat. As dead characters don't steal experience, if a LSoA joins the fight, it will get the xp per kill as if it was fighting on its own while still being helped by the fire imp.

Prerequisites: The method requires a second account which will summon a Fire Imp to help the LSoA character. This method mainly works when farming the two bandits outside of Foible's Fair during Vanguard Rescue: Farmer Hamnet.

Farm description: Team characters. Enter Wizard's Folly from Foible's Fair. Using the Imp Summoner first, follow the right cliff. Do not aggro the academy monk but aggro the ice elemental. Meanwhile, on the LSoA, take the left path (aggro the academy monk). Back on the Imp Summoner: aggro, ball and let the two bandits kill you. Use your suicide skills if you have and also any damaging skills to weaken (but not kill) the foes: this makes the run safer and faster. When close to dying, summon the fire imp. Have now your LSoA join the fight and finish any remaining foe.

Advantages: The imp deals a lot of damage and since it draws aggro first it will become the focus of the raiders' attacks. Having a high armor rating, steady healing and being not fleshy (immune to bleeding and therefore deep wound from the raiders) it should tank the attacks with ease. Weakening the foes beforehand allows for faster, easier and safer kills, especially for LSoA with a low damage output such as monks. It can also be used to cast powerful spells with a long recharge time such as Fire Storm, Empathy or Backfire. The Imp Summoner's corpse can be exploited to summon a minion if the LSoA is a necromancer.

Drawbacks: Two-accounting requires either the use of a Third-party program (not supported by Arenanet) able to open several accounts (such as GWMultilaunch) or having two computers. Getting a caster character at least level 17 in pre-Searing on another account is roughly equivalent to creating a new LDoA character.

Conclusion: While still unsafe and with complicated prerequisites, the Way of the Fire Imp provides the safest way to farm experience in pre-searing. It also allows non-mesmers and non-elementalists LSoA characters, such as monks, to really farm experience as their low damage output do not allow them to do so on their own.

The method also requires two-accounting (with the second account having a level 17 character), and is a lot less safe than the previous method. This is however the fastest run, approximatively 20-40% faster than Hamnet due to the superior experience gain.

Main idea: Utini Wupwup is rather close to the outpost and can be killed rather easily (for caster classes). As a lvl18 boss, he yields 128xp (and its surrounding Grawl 32xp, for a total of at least 160xp per run if you kill all three). The run can be as fast as 1min and as long as 3min for an average of 75-85xp/min.

Description: Team characters. Enter Green Hills County from The Barradin Estate. Have your second character leave the game. Now go straight east, then north towards the first spawning point. Maintain ctrl left pressed to see the name of the foes. Either kill Utini if he is there, or go further to the east(up the small "hill"). From there, you should be able to see at which one of its other spawning points he is (one south-east close to the Green Hills Caravan, the other further to the east, and the last one in the middle of the stone elementals to the north)

Advantages: Fastest runs implies less time during which a lag or computer crash can occur and less pain reaching your title. Utini grants a good chunk of experience, not counting its underlings, making for lucrative runs.

Drawbacks: Two-accounting requires either the use of a Third-party program (not supported by Arenanet) able to open several accounts (such as GWMultilaunch) or having two computers. The method's prerequisite is also hard to achieve (allbeit easier to get than the one of the other method above), as it means getting a character at least level 17 in pre-Searing, which (unless the player has already one) is roughly equivalent to creating a new LDoA character... Last but not least the method is very unsafe and if a big lag or computer crash occurs your character is as good as dead.

Conclusion: This method is usually faster for roughly the same requirements. Faster runs means safer runs, however, the absence of the Fire Imp and Academy Monk hurt.

(This is the fastest way since it is not impacted by daily limit, provided the character does not die in the process of course.)