This page provides an overview of some common running routes.

All outposts in the Prophecies campaign are accessible by running except:

Crystal Desert outposts can only be ran to after completing the Sanctum Cay mission. 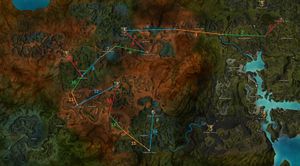 Temple of the Ages to Henge of Denravi 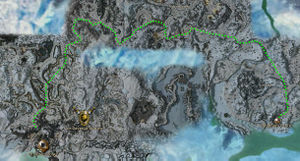 Factions has the fewest areas that can be reached via running alone; many of the zones are only unlocked via a mission or primary quest. 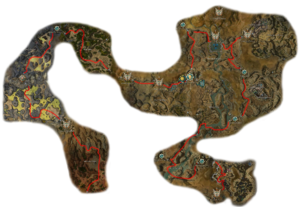 Most of the outposts on Istan require quest completion to access with the exception of non-Nightfall characters, but some outposts such as Sunspear Great Hall and Champion's Dawn do not have any prerequisites to enter. You can run to almost every outpost on mainland Elona, except for the Sunspear Sanctuary and The Mouth of Torment.

You can run to every outpost except for the Central Transfer Chamber; you can reach that outpost earlier than the storyline permits by joining a group during the primary quest, Destruction's Depths.