From Guild Wars Wiki
(Redirected from Miku Yuudachi)
Jump to navigationJump to search
Spoiler alert: The following text contains spoilers relating to the story of Winds of Change.

Miku Yuudachi (born in 1568 CC) is a Canthan assassin. When she was 14, she and her family were in Tahnnakai Temple when Shiro Tagachi attacked the temple, during which most of her family was killed. Believing that she was the only survivor, she fled Cantha and the plague. A year later, she was adopted by a family in Kryta and found a new home. In 1079 AE, during the Krytan civil war, Danthor the Adamant branded her foster family as traitors and had them all killed. During her time in Kryta, it was said by her aunt, Minister Reiko, that she died during the attack, though rumors persisted of her survival due to no body being found.

While seeking out Danthor to exact revenge, she crossed paths with Keiran Thackeray who aided her. After their time together, she returned to Cantha and quickly discovered that her brother, Ashu, had actually survived the Afflicted assault and has been portrayed by Reiko as the sole survivor of their family. When Miku tried to reacquaint herself with her brother, Reiko publicly accused her of being a threat to Ashu and forced her into hiding, causing Miku to investigate what happened over the past seven years. In the end, Miku decided to confront Reiko to stop her increasingly oppressive actions and killed her. 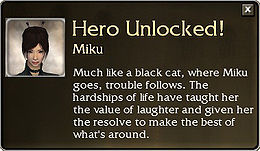 Miku joins your party upon completion of the quest The Final Confrontation at the end of the Winds of Change quest chain.

"What do you want? Are you staring at me? You want some of this? Do you?"
"When your eyes wander, so does your mind. Focus on the task that is at hand."

"Are we considering our next move or just enjoying the scenery?"
"Everbody wants to change the world, but no one wants to die."
"Okay, stop me if you've heard this one before... Wait. Are you even listening to me?"
"Shhhhh. Do you hear that? Yeah, that's the sound of nothing happening. Heh."
"The world is always changing us. In turn, those who are strong enough can change the world."

"For your sake, I hope you can learn to appreciate the taste of dirt."
"Have you heard the news that you're dead?"
"Here's one to remember me by!"
"If you aren't just a joke, then why am I laughing?"
"Oh, I'm sorry. Did I distract you?"
"Pay your respects to your ancestors when you meet them."
"That was very cute, what you tried to do there. Heh."
"This is how you disappear!"
"What's the difference between me and you? Well, for starters, I'm still breathing."
"You didn't need that, did you? Oh, yeah...I guess you did. Heh."
"You're fortunate: at least I'll be the last thing you see in this world!"
"You're making it hard to keep a straight face. Is that the best you can do?"
"Your luck ran out the moment you crossed my path."
"Your actions lack conviction. Let me show you resolve."