From Guild Wars Wiki
(Redirected from Initiate Zei Ri)
Jump to navigationJump to search
Spoiler alert: The following text contains spoilers relating to the story of Winds of Change.

Initiate Zei Ri is a member of the Ministry of Purity. He is one of the main members focused solely on eliminating all remaining Afflicted in Cantha. His father was killed during Shiro Tagachi's return, and it was never known if he was turned into an Afflicted. After the elimination of Afflicted, Zei Ri visited Tahnnakai Temple to pay respects and took a brief respite, later returning to duty when Reiko gave a speech in Kaineng City. Following this, he joined the task of hunting down the Am Fah and Jade Brotherhood. Over time, he shows a continual loss of faith in the Ministry of Purity as they become more ruthless, eventually leading to him leaving the Ministry. 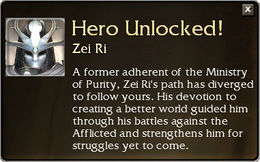 Zei Ri joins your party upon completion of the quest The Final Confrontation (Hard mode) at the end of the Winds of Change hard mode quest chain.

"Greetings, friend! I hope that this day finds you well."

After completion of A Chance Encounter
"Leave me be. Because of the assistance you lent me, I will not turn you in, but I can't forgive what you have done."

After completion of The Final Confrontation's hard mode quest
"Kaineng Center seems so different from how it once was. I wonder where things will go from here."

"Call out to our ancestors and they will come forth."
"From behind my mask, I could not see the sorrow of those around me."
"I am certain that my father's spirit has found peace at last."
"Our ancestors watch over us, even in these times."
"The collective wisdom of our ancestors and the strength they fathered and inspired will come to our aid. For at this moment, we are the reason they have existed."
"Together, let's work to create a peaceful world."
"Who we are… is who we were."

"Ancestors, guide my hand!"
"For a shining world!"
"For the Dragon Empire!"
"For those who have fallen to bring us this far!"
"From the beginning of this battle, you were already defeated."
"I will purge the darkness from this world!"
"Open your eyes before you are beyond redemption."
"Reach into the past… Invoke our ancestors!"
"The dream of a peaceful Cantha won't be stopped so easily."
"The power of the Dragon Empire is its people!"
"This is justice for your crimes."
"Witness the strength of unity."

Anomaly.If Zei Ri is out of compass range of his player, he will appear with his helmet on in the inventory window.