Sunspear rank is gained per character by earning Sunspear promotion points. This title can be displayed in the "Honor" monument.

Sunspear skills are PvE-only skills available to characters on accounts with the Nightfall campaign. They each cost one hero skill point and are available from the hero skill trainers at Kamadan, the Sunspear Great Hall, and the Command Post after reaching the first rank of the Sunspear title track.

The skills are dependent upon one's Sunspear rank, rather than an attribute. Because PvE-only skills cannot be unlocked, heroes may not use Sunspear skills. Since the May 17th, 2012 update, only Sunspear Rebirth Signet and Vampirism (due to a bug) continue to scale above Sunspear rank 5 (Sunspear Captain). All other skills reach maximum effectiveness at rank 5.

While Sunspear skills are not linked to any attribute, three of them are affected by primary attribute ranks, making them less useful for other professions. The Monk skill Seed of Life requires Divine Favor to increase its healing capability, the Assassin skill Critical Agility needs Critical Strikes to increase its duration, and the Paragon skill "There's Nothing to Fear!" uses Leadership to extend its duration.

Sunspear points can be earned by: 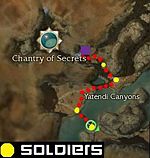 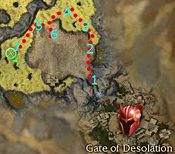 Exit to the north and take the Undead Hunt bounty (point 1 on map). Go northeast to the Wurm Spoor, avoiding the small Djinn patrol (2). Continue to the north into the sulfur and you will find a group of Awakened (3). Past them to the northwest is another group, along with a few elemental pairs (4). Next, go west past the wurm spoor for another group (5), which should put you over the bonus limit of 25 undead creatures killed. Turn back and head south onto the plateau to take on Vahlen the Silent and his group (6). There is a final group of Awakened at (7), but the time required to reach and kill them will decrease the efficiency of this run. This run will get you around 576 points and takes about 7 minutes, which is approximately 4,937 points/hour (with group 7). 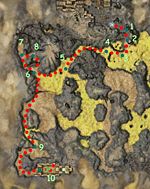 When going for the Elonian Vanquisher title, the vanquishing bonus and the Bounties encountered along the way will likely yield enough promotion points to max the Sunspear rank. Rewards and killing speed differ a lot depending on the area and route chosen. On average, it can yield around 2,000-3,000 Sunspear promotion points per hour. Vanquishing is neither the easiest nor the fastest way to farm promotion points, but it offers several benefits: