From Guild Wars Wiki
(Redirected from Halloween items)
Jump to navigationJump to search
... 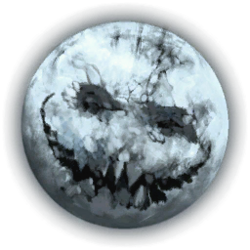 At Noon Pacific (-7 GMT) on October 18th, Tyria gets a little eerier as the Halloween celebration begins. Join in for spooky quests, creepy consumables, and the annual Costume Brawl. Mad King Thorn himself will appear every three hours on October 31st, starting at 12:01 AM Pacific. For more information, visit www.guildwars.com.

Get ready for two whole weeks of mischief and mayhem in Tyria, courtesy of Mad King Thorn and his Lunatic Court. The madness escalates to the final event on October 31, when the Mad King himself appears every three hours—join if you dare!

Halloween or Mad King's Day is a special event that occurs annually from October 18, 19:00, to November 2, 08:01 UTC (source), which celebrates the return of Mad King Thorn from the Underworld. Some outposts celebrate Halloween by decorating them to have an appropriately ghoulish and ghostly appearance. Preceded by his undead herald, Bruce the Herald, and his undead horsemen entourage, the populace is warned of the Mad King's arrival.

Mad King Thorn will appear in the circle of ghostly flowers every three hours starting at October 31, 07:01 UTC, and the finale will only affect those in the circle. Throughout the finale, Thorn will shout commands and rewards those who do them with an item (in 2005 and 2006, it was a random item, from 2007 on it is a Trick-or-Treat Bag). Those who fail will be killed. Deaths do not increase the death count. A Minutely Mad King Tonic is added to the inventory of every character who stands in the circle at the end of each finale. 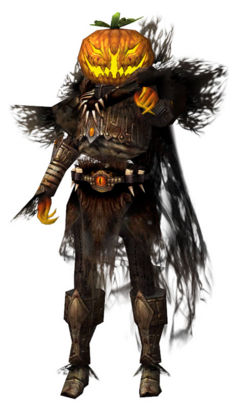 Lion's Arch, Droknar's Forge, Kamadan, Jewel of Istan and Tomb of the Primeval Kings are all redecorated in a suitably festive (dark) style.

Given by Mad King's Steward

Given by Gul Terror

Given by The Countess of Hakewood

Given by Emissary of King Thorn of Kryta

Each Halloween will make the Costume Brawl and Scarred Psyche available for use as well. Trick-or-Treat Bags will also drop from PvE foes for the duration of the event.

NPCs in Guild versus Guild have their models altered as follows; they are still considered humans (e.g. they are fleshy and do not take double holy damage):

Starting with Halloween 2012, each Halloween festival hat from Lion's Arch and Kamadan can be obtained from Erulis and Aahtan, respectively, for one Ghoulish Accessory Token.