Born in: Serenity Temple
Nation: Ascalon
Profession: Monk
Age: 22
Born in Serenity Temple to a priest of Dwayna and priestess of Balthazar, Mhenlo has been steeped in the teachings of healing and smiting magic. A devoted servant of both Dwayna and Balthazar, he has studied hard his entire life, and has been rewarded by both the gods of his provenance. But paying allegiance to two gods has not been without its consequences; having no clear path to follow, Mhenlo has a tendency to over-analyze situations and possible consequences, not sure whether to take the path of aggressive strength or that of defensive grace.

Mhenlo spent much of his life inside Serenity Temple, paying homage to the old gods and studying the Path, which will lead him to enlightenment. He is rather timid as the story begins, not completely trusting of his magical prowess. But with Cynn's help he gains confidence and becomes more comfortable with his considerable power.

Mhenlo spent much of his life inside Serenity Temple, paying homage to the old gods and studying the Path, which will lead him to enlightenment. He also spent a long stretch of his youth studying under Master Togo of Shing Jea Monastery, where he was exposed to even more religious and philosophical teachings that made it no easier for the young monk to find a focus in life. But the teachings of Togo and the Ritualist’s wisdom made a deep impact on Mhenlo. When Master Togo sends a request for Mhenlo’s aid, the monk wastes no time gathering his friends and setting out for Cantha.

Mhenlo (born either 1049 or 1050 AE) was a traveling companion of Devona, Cynn, Eve, and Aidan, whom he had traveled with ever since the Searing. He is in a relationship with Cynn, who is constantly jealous of Mhenlo's Canthan childhood friends. Though not originally confident in his own abilities, his interaction with Cynn is one of the major reasons he becomes more sure of his path in life, and of his own capabilities.

He was the last Tyrian to study at Shing Jea Monastery before it was shut off from foreigners, having graduated in 1067 AE. He is known throughout Cantha, especially by Kurzicks in the Echovald Forest, due to his travels when he was a student. Many Kurzicks had presumed Mhenlo to be dead until he returned to Cantha in 1072 AE to aid Togo in dealing with the return of Shiro Tagachi.

Alongside Aidan, Cynn, and Devona, he met Eve in a graveyard while being chased by Charr, and the group later joined Prince Rurik in an assault against the Charr, eventually joining the Ascalonian migration to Kryta. The group then traveled across Tyria, participating in the fulfillment of the Flameseeker Prophecies. Soon after, Mhenlo received a letter from Master Togo requesting his return to Cantha for aid against a mysterious new plague that had arisen. All of his friends traveled with him, each with their own reasons, though Devona was the first to volunteer.

In 1075 AE, Mhenlo and the others were recruited by Kormir to join the Order of the Sunspears in order to fight against Varesh Ossa, Abaddon, and their demonic Margonites during Nightfall. During 1078 AE, the group aided in the fight against the Destroyers and their master. Though their actions afterwards are unknown, the group appears a year later for Gwen and Keiran Thackeray's wedding, where Mhenlo is confronted by an annoyed, and still unmarried, Cynn. Later during the events in Cantha of 1079 AE, Mhenlo along with fellow monastery students and headmasters, held off and suppressed a Sensali assault on Shing Jea Monastery, and during a fiery exchange with Cynn proposed to her in order to receive her aid. 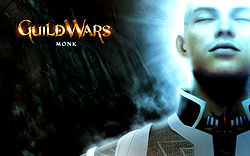